Nominated for the Liebster Award!

I can't believe it! I was nominated by the beautiful Smiley Sarah at Enchanted By A Book blog - and I just wanted to say a huge thank you to Sarah, and that I am truly humbled and honoured by her nomination. I'm so excited!!

So here's a little about this award: 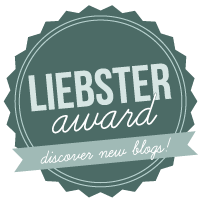 It's an award for new/fun blogs. I can't believe that 21st Century Once Upon a Time's made the list! For those bloggers that I nominate, here are the rules that go along with the nomination:

- Link back the blogger that tagged you.
- Answer the questions of the one who tagged you.
- Nominate ten other blogs/bloggers.
- Ask ten questions for the bloggers you nominate.
- Let your nominees know of their awards and tag backs.

1. Have you ever heard a song that you thought described a book perfectly? If so, what book was it and what was the song?

OMG yes! That was Stand My Ground by Within Temptation for the book Splintered by AG Howard. It's all about the heroine facing her fears and realising that there's no escaping one's destiny - you have to embrace it. Not only were the lyrics a great match, but the music was simply gorgeous.

I'd love the ability to see the future, and decide which path/outcome I would follow, like Addison Coleman from Pivot Point by Kasie West.

3. Why, in your opinion, are books so much better than movies?

I guess it's because there are some things only your imagination can create. The sets, the actors, the script...they can only do so much. That spark, that allure that you gain from reading books and igniting your imagination can't be replicated. It just can't.

4. What is your favourite dessert or candy?

5. What is the closest casting choice (in a book to film) to how you imagined that character?

Alan Rickman as Snape. No competition! Every time I read the books now, I picture him ;)

6. What is the most unique book you have ever read?

Crown Duel by Sherwood Smith. It's also one of my favourites.

7. What is the coolest character name you have ever encountered in a book?

8. What is your all-time favorite book quote and what book was it from?

“A reader lives a thousand lives before he dies, said Jojen. The man who never reads lives only one.” ~ George R.R. Martin, A Dance With Dragons.


9. What is a scene from a book that you wish the author would have done completely different? How would you have written that scene?


The final chapter of Harry Potter. I loved it, truly, I would have added more insight into the lives of each of the characters. The end felt so abrupt - it felt like losing close friends. I would have loved to have found out more about what Harry, Hermione and Ron ended up doing after Hogwarts. Did they complete the final years they missed? Did they become Aurors? I guess we'll just have to use our imaginations!


10. What is the craziest dream or nightmare that you've had? (Try to describe the crazy details.)


No joke. In mid-highschool I was in the Advanced Maths class. One night, I had a dream that I was in Maths class. I had to go through the entire class, solving complicated equations, getting most of them wrong and being utterly humiliated by my Maths teacher. By the end of the dream I was exhausted... only to wake up and realise I had double Maths that day!


*laughs* So, yep. That was some nightmare. I've had worse, but I could never remember the details.

A big thanks to Sarah once again and congratulations to the other nominees! :)
Posted by BookNut 101 at 21:12