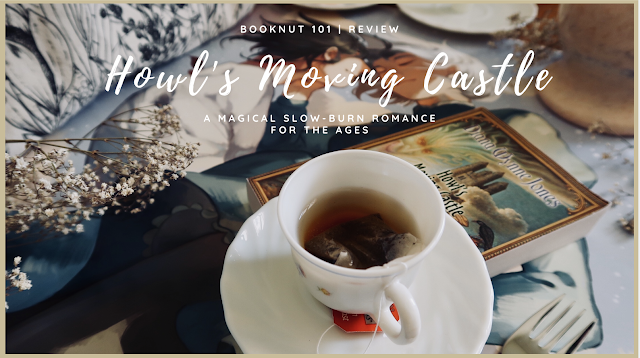 A heart's a heavy burden...

Many novels incorporate elements of romance. Some, with a heavy hand - passionate, fiery connections that burn bright and hot. Others, with a subtler touch - the occasional glance, stolen moments, leading to a love that burns steady and true.

I myself have always been more partial to slow-burn romances. Romances that allow the characters involved to get to know one another on a deeper level than the physical. A romance for me shouldn't overshadow the plot or act as a substitute for it. And a perfect example of this is Howl's Moving Castle.

I fell in love many years ago with the Studio Ghibli adaption of Howl's Moving Castle. It was colourful, fun and entertaining. From the beautiful soundtrack to the perfectly cast voice actors, it was an utter success and an immediate favourite. However, it wasn't until recently that I found the time to pick up the original tale in book form and give it a go.

From the very first page I was captivated by Diana Wynne Jones' special brand of storytelling magic. I can't wait to share my thoughts on this epic novel and its unforgettable adventure with you all (see below). 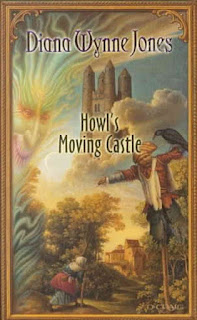 My thoughts: There is an air of whimsy - of nonsensical mutterings and magic - that accompanies Howl's Moving Castle. Its unique approach to magical concepts and character development caught my imagination from the get-go.

Let's start with the magic. In a departure from the traditions of mainstream literature, Howl's Moving Castle rarely finds the need to sit its readers down and give them an extensive lesson on the world's magical history.

There are no lengthy paragraphs dedicated to long-winded, monotone explanations. You're so fully immersed in the world that you barely notice as Diana feeds you breadcrumbs of information (e.g. via character conversations and actions) that help you to fully visualise her unique world. There is a 'matter of fact' air about the book's magic that gives a sense of realism to the world and its characters. Magic isn't grand, or awe-inspiring to magic-users - it's as natural to them as breathing. The hints of awe come through Sophie (who acts as a stand-in for us mere mortals) and she is our guide through the weird and wonderful magical shenanigans that take place.

The characters are the icing on top of this fictional cake. They're quirky and flawed and oftentimes vexing. Yet through it all, their brazen honesty and wit call to something in us all and make them not only enjoyable but also memorable.

Howl himself is a vain, fickle creature with seemingly frivolous ambitions. Or as Sophie puts it:


"'He's fickle, careless, selfish, and hysterical,' she said. 'Half the time I think he doesn't care what happens to anyone as long as he's alright--but then I find out how awfully kind he's been to someone. Then I think he's kind just when it suits him--only then I find out he undercharges poor people. I don't know, Your Majesty. He's a mess.'”


Sophie, on the other hand, is the family doormat - discontent with her lot in life but lacking the courage to ignite change. She lives to feel needed by others - to provide labours of love in the hopes of being loved in returned. Although she's the heroine (and as such we're set up to be sympathetic to her plight) she's still in need of personal growth. Much of the wisdom she needs, funnily enough, can be found in Howl:


“'You are a terror, aren't you? Leave this yard alone. I know just where everything is in it, and I won't be able to find the things I need for my transport spells if you tidy them up.'

So there was probably a bundle of souls or a box of chewed hearts somewhere out here, Sophie thought. She felt really thwarted. ‘Tidying up is what I’m here for!’ she shouted at Howl.

‘Then you must think of a new meaning for your life,’ Howl said.”


Together, Sophie and Howl are a union of contrasting - and complementing - flaws and idiosyncrasies. They understand the messy, contradictory nature of love and are willing to take it on, despite knowing that the person they love isn't perfect. People are complex and Howl's Moving Castle does a fantastic job of portraying this complexity.

With a brilliant cast of characters (shout out to Turnip Head!) and a beautifully constructed world, Howl's Moving Castle is as vivid and enchanting as its Studio Ghibli adaption. I can't wait to pick up the rest of the series!

‘Sophie stared at the blue jewel hanging from Howl’s ear and passed him egg after egg. (...) “I came because I’m your new cleaning lady, of course.”

“Are you indeed?” Howl said, cracking the eggs one-handed and tossing shells among the logs, where Calcifer seemed to be eating them with a lot of snarling and gobbling. “Who says you are?”

“I do,” said Sophie, and she added piously, “I can clean the dirt from this place even if I can’t clean you from your wickedness, young man.”

“Howl’s not wicked,” Michael said.
“Yes, I am,” Howl contradicted him.’

Have you watched/read Howl's Moving Castle? If so, did you enjoy it?!