It's time for Thursday Quotables!

Thursday Quotables is all about sharing a favorite quote, line, or passage from your reading each week. You know it's a good read when you come across a bunch of memorable quotes!

This week's quote comes from Ketchup Clouds by Annabel Pitcher.

Ketchup Clouds is a YA contemporary novel that builds up a tale of mystery, crime, and intrigue through a series of gripping letters written by a young girl to a man on death row.


There were so many great quotes to choose from. But I managed to settle on a quote that I think truly showcases the novel:

Quote: 'You sort of remind me of Harry Potter to be honest. I can’t remember when the first book came out, if it was before or after your murder trial, but anyway in case you’re confused Harry Potter has a scar and glasses and you have a scar and glasses and he never got any post either. But then all of a sudden he received a mysterious letter saying he was a wizard and his life was miraculously transformed.

Now you’re probably reading this in your cell wondering, ‘Am I about to be told I have magical powers?’ and if the website is anything to go by, I bet you’re imagining healing every single one of those stab wounds in your wife. Well, sorry to disappoint you and all that, but I’m just an ordinary teenage girl not the Headmaster of a School of Witchcraft and Wizardry. Trust me, though, if this biro was a wand then I’d give you the magic to bring your wife right back to life, because that is something we have in common.

Mine wasn’t a woman. Mine was a boy. And I killed him, three months ago exactly.

Do you want to know the worst thing? I got away with it.'

What did you think of the quote? Have you read Ketchup Clouds, or do you plan to? Let me know your thoughts below! 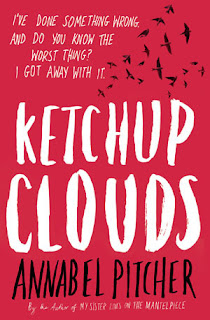 Secrets, romance, murder and lies: Zoe shares a terrible secret in a letter to a stranger on death row in this novel from the author of the bestselling debut, My Sister Lives on the Mantelpiece.

Fifteen-year-old Zoe has a secret—a dark and terrible secret that she can't confess to anyone she knows. But then one day she hears of a criminal, Stuart Harris, locked up on death row in Texas. Like Zoe, Stuart is no stranger to secrets. Or lies.

Full of heartache yet humour, Zoe tells her story in the only way she can—in letters to the man in prison in America. Armed with a pen, Zoe takes a deep breath, eats a jam sandwich, and begins her tale of love and betrayal.