The Hunters Become the Hunted - My Heart Be Damned Review 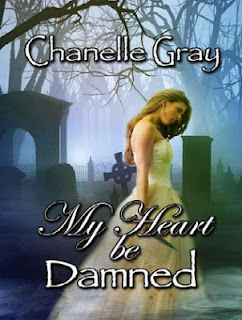 
'Marshall perched hesitantly beside me. "They asked me to protect you."

My eyes widened. "What? Who did? The Sisterhood?"
"No, the Teletubbies did. Of course, the Sisterhood."

Marshall rolled his eyes at me, and it took all of my will power not to shove him off the bench.'


Some girls hang out at the mall. Others at cafes. Amerie Carter hangs out at the local graveyard.

It's dangerous.
It brings back memories she'd rather forget.
But it's her job.

Amerie was born a Hunter - a race of strong (somewhat feisty) women created by an entity named The Sisterhood. The Hunters hunt the Damned; escaped souls from Hell who take up residence in human bodies.

Living a double life, Amerie's a highschool student by day and an ex-Hunter at night. Why ex?

Combined with freak Damned attacks and a thirst for revenge, Amerie decides to take matters into her own hands.

But she isn't alone

Dane Marshall is wicked, handsome and a pain in the ass...but when his 'stalkerism' saves Amerie's life, she discovers that there's more to this bad boy than meets the eye.

Marshall offers to help Amerie train. She refuses; her prejudices against him too numerous to count. But then he makes her an offer she can't refuse.

He'll help her track down and kill her mother's murderer. He'll give her the revenge she's been seeking.

Revenge is best served cold - but at what cost?

Amerie struggles to keep her two worlds from colliding - her family falling apart and her friends, Chuck, Mercy and Sam, bemused and a little hurt over her constant excuses and indifference to the many bruises and cuts that she turns up with every day.