He Was A Boy, She Was A Girl ~ Love & Skate by Lila Felix Review 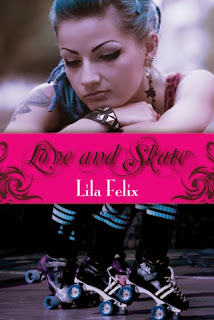 Love and Skate
By Lila Felix

NA romance is like a packet of Allen's Lollies - sometimes, you'll get a handful of your faves...and sometimes you'll get one or two liquorice flavoured jelly babies which will ruin your day.

Well Love and Skate was definitely not a liquorice jelly baby! (Unless you happen to love liquorice flavoured confectionary)

Love and Skate is a NA romance with a punk twist, introducing two characters who you will grow to love, root for, and cry over during the course of this novel.

The first of them, being our main protagonist/roller derby gal, Nellie Forrester:

"Yes Mom, I know that I'll never find anybody who loves me with blue hair. That's why I dyed it pink."

Nellie's straightforward personality, wit and charm create a character who has depth and a brain where most female characters only have air and 'feelings'. She has the rare female character ability to see the difference between love and lust - and to only accept the former.

With a strength built up from years of heartache and a lack of acceptance from her family, Nellie is ready to take on anything.

'I stood stunned. She had known me less than a week and had me all figured out. She pecked me on the lips and left me standing there in the parking lot, standing on the line that marked where her car was. But instead of feeling betrayed, I felt freed.'
Owen and Nellie are basically two peas in a pod.

With his own skeletons in the closet, Owen has a hard time with trust - something that he admits he struggles to come to terms with on a daily basis. Yet, be ready to throw your fangirl pom-poms up and down, because this tattooed mountain of maleness is...

*drum roll*Chivalrous!That's right, ladies! He may have tats, but the guy has more chivalry packed into his frame than most clean-cut guy characters have at the end of a novel.

Owen and Nellie's relationship spans across a little over 200 pages, and is allowed to grow, and to be explored by the reader in all its facets - good, bad, ugly. And downright adorable.

So if you like novels about cute guys who meet feisty girls who happen to like playing at roller derbies, you'll definitely like Love and Skate.

Although, be prepared to do this more than once: