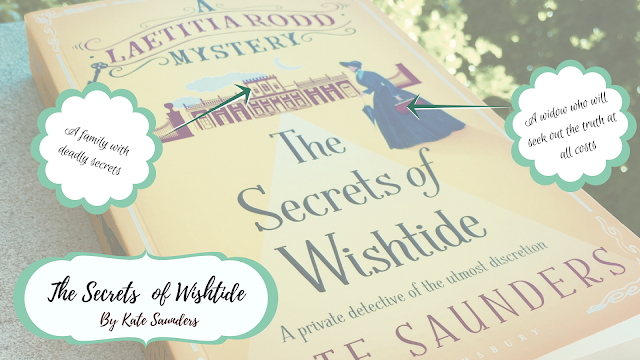 Who doesn't love a good sleuth?

A well-written sleuth can elevate a book from 'a book you read' to 'a book you will re-read time and time again and possibly recommend to your entire family'.

Detectives bring charm, wit, amazing cognitive skills, and powerful tools of observation to the table. They dig below the surface layer of the story and bring to light plotlines and secrets that can turn the whole tale upside down.

Sherlock Holmes may be a household name...

...but Mrs Laetitia Rodd may soon steal his crown (or at least grab one of her own!). As soon as I read the synopsis for The Secrets of Wishtide by Kate Saunders online, I couldn't wait to discover how Ms. Saunders planned to take the female detective role and advance it further through the character of Mrs Rodd.

And thanks to the awesome people over at Allen & Unwin I received a copy of this intriguing novel to read and review.

(Shout out to the awesome magic of Instagram filters! Just look how shadowy and moody these pics of the book look. Especially with that candle that I totally use on a daily basis and that I did not just take out purely for the purpose of these photos *cough*) 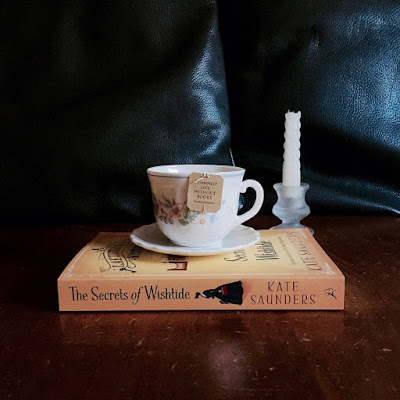 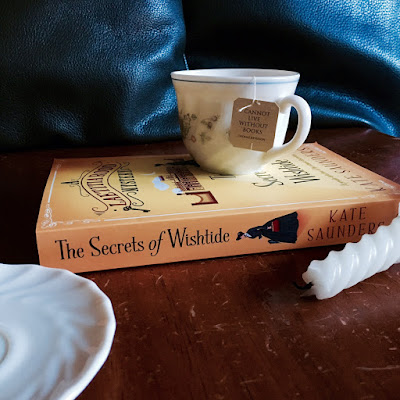 Read on for more info + my thoughts on the book! 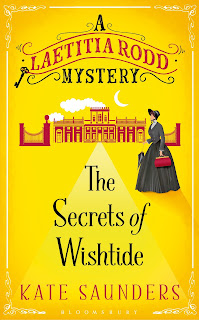 
Synopsis: Mrs. Laetitia Rodd, aged fifty-two, is the widow of an archdeacon. Living in Hampstead with her confidante and landlady, Mrs. Benson, who once let rooms to John Keats, Laetitia makes her living as a highly discreet private investigator.

Her brother, Frederick Tyson, is a criminal barrister living in the neighboring village of Highgate with his wife and ten children. Frederick finds the cases, and Laetitia solves them using her arch intelligence, her iron discretion, and her immaculate cover as an unsuspecting widow. When Frederick brings to her attention a case involving the son of the well-respected, highly connected Sir James Calderstone, Laetitia sets off for Lincolnshire to take up a position as the family’s new governess—quickly making herself indispensable.

But the seemingly simple case—looking into young Charles Calderstone’s “inappropriate” love interest—soon takes a rather unpleasant turn. And as the family’s secrets begin to unfold, Laetitia discovers the Calderstones have more to hide than most.

Ah, male detectives. Often associated with much posturing and bumbling, they often tend to get hooked on a certain path. Once an idea has occurred to them they'll toy with it for hours and days at a time, all whilst losing sight of the bigger picture.

Female detectives have an advantage (sorry all you male sleuths out there!). It's simple: they're women. They're born for multi-tasking, observation...and occasionally gossip! But above all they're easily overlooked in the greater scheme of things and almost always underestimated by their peers or male counterparts.

But as Mrs Laetitia Rodd is about to prove to us...you should never, ever, underestimate a woman. Especially an impoverished widow with an eye for crime.

Do you guys remember Marple? If you haven't heard of Marple...you have a gaping hole in your life that you need to fill with her awesomeness immediately! One of author Agatha Christie's star characters, Miss Marple is an old lady with a shrewd intelligence and a penchant for gossip - whose ability to solve mysteries and crimes is legendary. She's also extremely sassy!

When parallels between Agatha Christie's works and The Secrets of Wishtide were made in promo materials, I was a little skeptical (being an avid Agatha Christie fan!). But once I started the novel, I could see how the two women would have gotten along. Both have an eye for details and a way of talking to people and extracting key information.

Mrs Rodd is similar to Marple, but not irritatingly so or in a copycat-esque way. She's a lot kinder, a lot softer around the edges. She's also a widow which ties in to a lot of the story, with little references here and there to her departed husband. Her love for him and his memory makes Mrs Rodd all the more kinder at heart - a trait not often associated with sleuths!

But it makes her a better sleuth, because she follows her heart and her instincts, leading her to the core of the matter.

A woman in love...or a black widow?

In The Secrets of Wishtide the wheels of the story really start turning when Mrs Rodd receives her new case. The Calderstones, a wealthy and influential family, have their sights set firmly on Helen Orme.

Helen, a young widow, is romantically interested in the Calderstones' son, Mr Charles. But the family consider her to be a scheming gold digger with an obscure past, and have tasked Mrs Rodd with finding out what Helen Orme's dark secret is.

But when a man is found dead outside a local tavern, Mrs Rodd begins to question the path she's being led down. Is Helen Orme really at the heart of this twisted tale? Or is she a red herring, an innocent victim set up to take the fall?

I will admit that this book was rather like a cup of tea.

I love tea! But...the thing with tea is you can't drink it straight away. Nope, there's a long and complex list of things to do before you can take your first sip. The main one? Steeping.

Steep (verb): soak food or tea in water or other liquid so as to extract its flavour or to soften it.

The Secrets of Wishtide needed several minutes of steeping before it was ready to enjoy fully. In my case, the steeping took around 5-10 solid minutes to get a decent level of concentration going.

If this metaphor has completely baffled you as my metaphors and analogies have a tendency to do! let me explain: steeping in this case just means giving your brain time.

This is not a book that I, personally, could dive right into...unlike I usually do with what I like to call 'lazy day reads'. It was the kind of book that required several minutes of pure concentration. It also required quite a few re-reads of paragraphs and sentences, just so I could get a grip on the story's characters and plot.

I think the main problem was that this book didn't start at an identifiable Point A. Instead, it kinda drop-kicked me into the middle of the awesome ocean that is The Secrets of Wishtide without a lifeboat or even a paddle.

Not that I have a problem with books that are detailed! Those are great and I'm a fan of not spoon-feeding readers. But this book seemed to reference past happenings and connections between characters that I had no clue about. I kinda felt like this was a second novel in a series...but no, it's the first!

It was just so full of matter-of-factness that I assumed I should already know about 89% of the things being mentioned in the first few chapters. But it does get easier. It just takes a little effort on your part to understand the world and its characters fully. Then you can sit back and enjoy the ride!

All in all The Secrets of Wishtide is a modern detective masterpiece.

Its unique style, steeped in historical research and vivid imagery, is instantly noticeable from the very first page and is truly captivating. You can tell that Kate Saunders has put her heart and soul into this book and its characters, who are larger than life and contain hidden depths.

The reason I'd liken this book to the works of Agatha Christie, is in regards to its ability to put you, the reader, in the hot seat. You're never idly reading the story, letting the professionals (in this case Mrs Rodd) take the reins and do all the hard work. It's impossible to resist the urge to be the detective - to put together the clues and make your own judgements.

So if you love a good mystery novel and are looking for a read to challenge and charm you, look no further than The Secrets of Wishtide.

And I'm sure we can all look forward to any further books in this series (I for one can't wait to see what Mrs Rodd gets up to next!).

"To tell the truth it was a godsend that she was setting up home with poor Winifred; otherwise one would have felt obliged to have Winifred here."
"Lord. No," said Sir James. "Face like a horse."