We That Are Left Blog Tour ~ Review + Guest Post 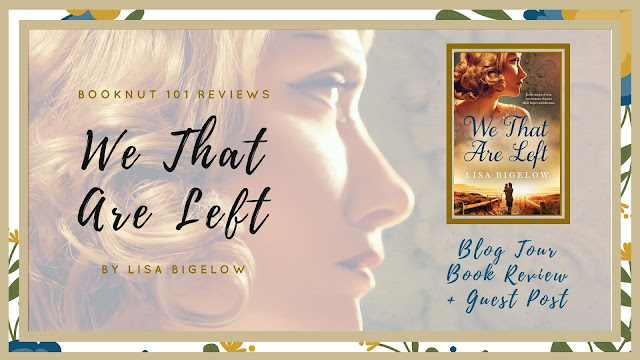 I am woman, hear me roar.

Women have always played a diverse and multi-layered role in our world's history. Whether it was at the forefront, or behind the scenes, women often found ways of dealing with seemingly impossible trials and overcoming them.

Lisa Bigelow's We That Are Left is a story that highlights the ability of women to adapt, evolve, and triumph in times of turmoil and war. Thanks to Allen and Unwin I was able to obtain a copy for review as a part of their We That Are Left Blog Tour. It was an emotional read that balanced history and heart. 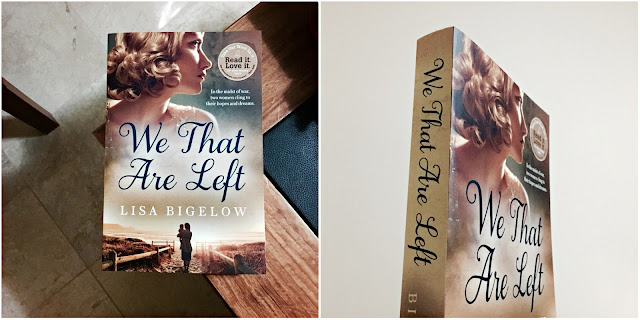 For more We That Are Left Blog Tour content, follow the tour as it hops from blog to blog! Details can be found on the tour's official poster (bottom of post). 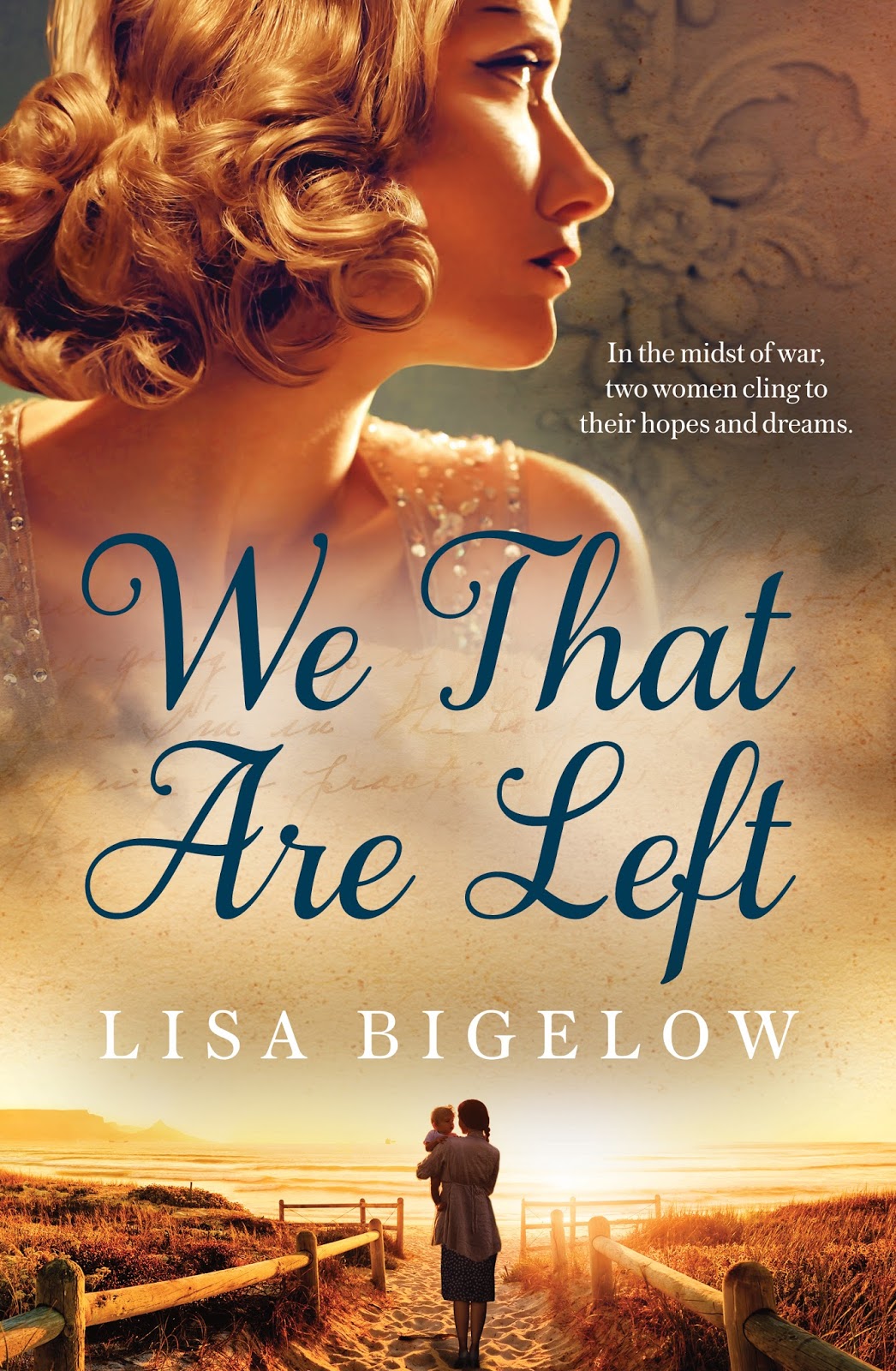 We That Are Left
By Lisa Bigelow

Summary: A moving debut novel about love and war, and the terrifyingly thin line between happiness and tragedy, hope and despair.

Melbourne, 1941. Headstrong young Mae meets and falls head over heels in love with Harry Parker, a dashing naval engineer. After a whirlwind courtship they marry and Mae is heavily pregnant when she hears that Harry has just received his dream posting to HMAS Sydney. Just after Mae becomes a mother, she learns Harry's ship is missing.

Meanwhile, Grace Fowler is battling prejudice to become a reporter on the afternoon daily newspaper, The Tribune, while waiting for word on whether her journalist boyfriend Phil Taylor, captured during the fall of Singapore, is still alive.

Surrounded by their friends and families, Mae and Grace struggle to keep hope alive in the face of hardship and despair. Then Mae's neighbour and Grace's boss Sam Barton tells Mae about a rumour that the Japanese have towed the damaged ship to Singapore and taken the crew prisoner. Mae's life is changed forever as she focuses her efforts on willing her husband home.

Set in inner Melbourne and rural Victoria, We That Are Left is a moving and haunting novel about love and war, the terrifyingly thin line between happiness and tragedy, and how servicemen and women are not the only lives lost when tragedy strikes during war.

We That Are Left by Lisa Bigelow is published by Allen & Unwin, RRP $29.99, available now.

We That Are Left is a tale highlighting female strength.

As an avid history student, both back in highschool and currently in university, I am always drawn to tales of women who defied odds, or overcame obstacles. Sometimes the stories come in the form of 'epic' tales - stories featuring women whose feats were so thrilling, so impossibly brave or ingenious, that it was hard to believe that they were real.

But, more often than not, the stories are much more mundane - although just as impactful. Women who were good mothers, good wives, good people. 'Average' women who carried life's burdens and still found reasons to smile, or offer a kind word. These women held a kind of magnetic pull, because they didn't need to discover new horizons or jump headfirst into battle. They used what they had to keep things running and to keep up a sense of hope and strength, even during the darkest times.

We That Are Left features two such women.

Mae and Grace are such intriguing characters. In their own ways, each of them utilises the war and its accompanying emotions of grief, worry, fear, and anger. They used these emotions to fuel their will to live and to fight in the small - or bigger - ways that they can. The women the war left behind are shown to grow, if not thrive, in a world that was so sure they'd simply fall apart.

Lisa Bigelow is so talented. She has a way of writing that really highlights the humanity in her characters. From character idiosyncrasies, to subtleties of speech, there are so many delightful instances where the reader becomes lost in the world Lisa Bigelow has painted. It's often hard to consider this fiction whilst reading it, because its message and story ring so true - emotionally and historically. Stories like this help us to remember the women and the moments that defined Australia as a country - and that impacted the world.

Historical fiction can often be a struggle.

I know that for a lot of people, historical fiction is a 'chore' to get through. Personally, I enjoy historical fiction (although I usually steer towards either the ancient, Victorian, or ballgown variety!) yet I have always found modern historical fiction to be a difficult genre to navigate. You often feel like you've heard this tale before.

The key is for the author to reinvent - or present a shifted perspective on - history. The reader need to view these characters as a worthy investment of their time and emotion, rather than as representations of historical issues or concepts. And Lisa Bigelow's characters, with all their personal trials and flaws, do not come across as artificial or as 'regurgitated' history. You're invested in them and their journey from the start.

We That Are Left paints a portrait of history whilst paying tribute to those who paved the way for the present.

'Clutching the robe, stiff from the clothesline, she rolled it lengthwise and lay on the bed beside it so it stretched from her face to her feet, her knee bent across the middle as though Harry were inside it. She closed her eyes and inhaled slowly and deeply. I'm right here, darling. I'm staying right here till I know you're coming home.'

I began writing this novel from Mae Parker’s perspective. But parts of the HMAS Sydney story were begging to be told that were difficult to weave into the existing narrative of Mae and her family and friends. At one point a publisher who read an earlier draft of my manuscript suggested that I should try adding a female journalist to the story. That suggestion immediately sparked possibilities. In fact,
I went to a gym class that night and as I was working out, Grace Fowler appeared in my imagination and began presenting parts of the story that I’d so far had to leave out.

Grace could cover news events that Mae might not have known about and she could also illustrate the work and career opportunities that women had during wartime, knowing that they would have to return to the kitchen when the men came home. She could also interact with the Women’s Land Army and write stories about rationing while having a parallel experience to Mae, of waiting for
news of her boyfriend and wishing him home. 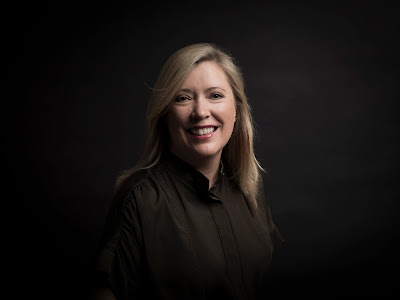 Lisa Bigelow’s life revolves around story-telling. An avid reader from age five, her career as a journalist and communicator has been all building and delivering compelling stories about water resources, climate change and any issue that interests her audiences.

She recently completed a Masters Degree in Communication and aims to use her writing to illuminate ongoing issues and make them accessible to a wide readership. We That Are Left is her first novel. 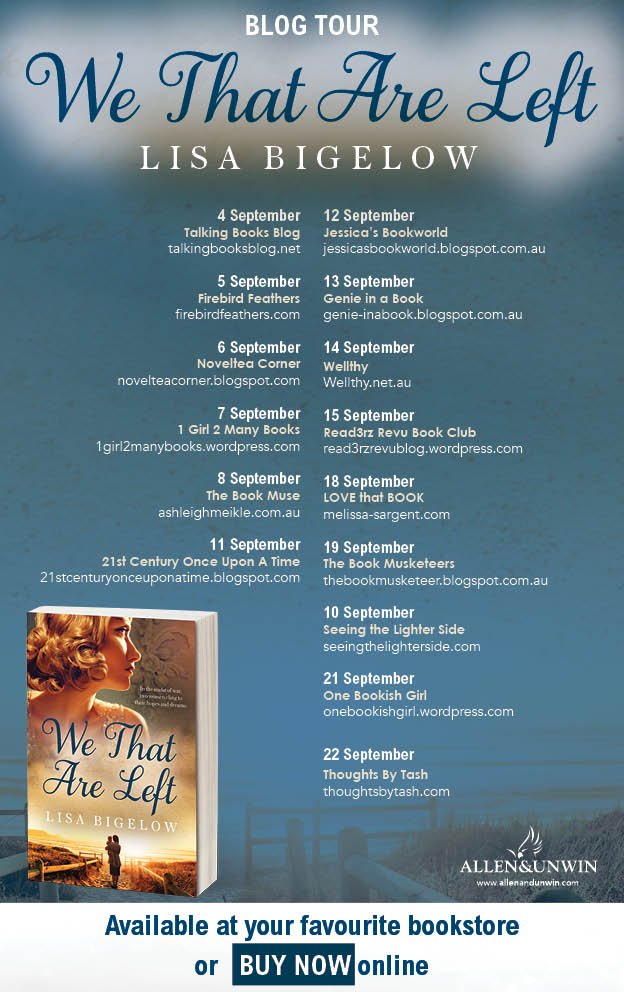