Igniting The Imagination | We Hunt The Flame (Review) 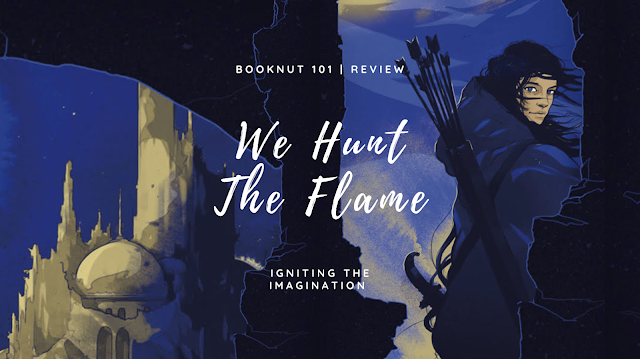 There are books that are well-written.

A well-written book is like a cake. A certain 'recipe' can be followed, certain measures can be taken. There is a process that can be perfected in order to 'bake' a book and have a satisfactory novel as an end result.

And then there are books that are masterpieces.

We Hunt The Flame is such a book. It wasn't made using a go-to 'recipe'. It forges its own path and has a distinct flair and originality that makes it a truly memorable gem of a read. My full thoughts on the book are below.

Thank you to Pan Macmillan Australia for sending me a copy of this incredible book to read and review. 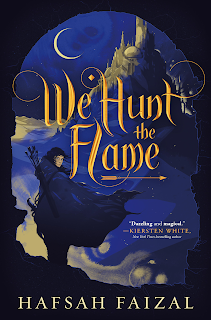 We Hunt the Flame (Sands of Arawiya #1)
By Hafsah Faizal


My thoughts: We Hunt The Flame is a vivid tapestry of Arabian and fantasy elements, resulting in an unforgettable journey that is worthy of its own legend.

From the very first page, I was hooked by Hafsah Faizal's clever worldbuilding and seamless integration of Arabic terms and concepts. Oftentimes it is difficult for an author to effectively and accurately merge another culture or a language with English storytelling or within a fantasy world. We Hunt The Flame has no issues with this at all, allowing for an immediate - almost instant - immersion into the kingdom of Arawiya.

As I progressed through the novel, there was never a moment where I felt like a traveller in an unknown land. Hafsah Faizal's writing style is utterly poetic and reveals her world in easy-to-digest snippets that always tease at deeper or greater revelations to come. We Hunt The Flame was not a novel that ever released its hold on me. There was never a time where my mind and imagination disengaged from the plot and its characters. That level of storytelling from a debut novel speaks volumes as to Hafsah Faizal's true talent as an author.

Nasir was a brilliant character. His title, or persona, of 'The Prince of Death' is a fascinating contrast to the layered and complex man he is. Both he and Zafira were so fleshed-out, with detailed motivations and personal flaws and triumphs...it was a joy to read about both of them. I am usually the sort of person who dislikes switches in character POV, as it usually ruins my immersion in the book. But due to the wonderful construction of these characters, I became so invested in them that I was eager to slip from POV to POV and experience the inner thoughts of each one.

The chemistry between character was off the charts! I have ever only truly felt the like in the Throne of Glass series - that kind of connection that leaps off of the page. The following quote is a great example:

And her world disappeared.

She had never expected a hashashin’s lips to be so soft. So gentle. Like the first snow across the jumu’a, melting at mere embrace. But Zafira had befriended the darkness. She had slain safin and ifrit. She was the Huntress. She was magic.

Zafira bint Iskandar did not want gentle from the Prince of Death. She wanted more.

He pulled back and read her face. She traced his scar with one trembling finger, and he murmured a curse as something wild gripped her. She knotted her hands in his hair—pausing at the softness between her fingers, the feel of him against her—before she pulled him closer.'


To say I liked We Hunt The Flame is an understatement. I adored every page, every sentence, every word. It's a literary masterpiece and I cannot wait to read what Hafsah Faizal has in store for us bookworms next.

Nasir wondered what it was like to live without the endless and ever-shifting sands beneath one’s feet. Without the sun deepening one’s skin and rooting in one’s soul. Without the push and pull as the heat of the sun-drenched and the cold of the moon caressed.

He glanced back to find her watching him, for once, unreadable. Her lips were pursed.

Why did the compass lead me to you? he wanted to ask.

He looked away first.'

Have you read We Hunt The Flame, or will you be adding it to your TBR?