OMG - EXCERPT FROM CITY OF LOST SOULS BY CASSANDRA CLARE!!!! 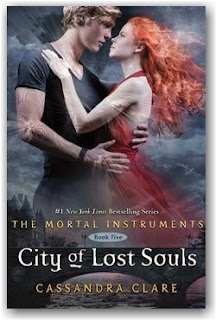 Best ever excerpt...wanted more Jace (obviously!) BUT the ending to this excerpt has me eating away at my fingernails in suspense...NEED THE BOOK NOW!!! But, we all have to develop self-control sometime *sighs*. ENJOY and comment below!

Simon stood and stared numbly at the front door of his house.
He'd never known another home. This was the place his parents had brought him home to when he was born. He had grown up within the walls of the Brooklyn row house. He'd played on the street under the leafy shade of the trees in the summer, and had made improvised sleds out of garbage can lids in the winter. In this house his whole family had sat shivah after his father had died. Here he had kissed Clary for the first time.
He had never imagined a day when the door of the house would be closed to him. The last time he had seen his mother, she had called him a monster and prayed at him that he would go away. He had made her forget that he was a vampire, using glamour, but he had not known how long the glamour would last. As he stood in the cold autumn air, staring in front of him, he knew it had not lasted long enough.
The door was covered with signs—Stars of David splashed on in paint, the incised shape of the symbol for Chai, life. Tefillin were bound to the doorknob and knocker. A hamesh, the Hand of God, covered the peephole.
Numbly he put his hand to the metal mezuzah affixed to the right side of the doorway. He saw the smoke rise from the place where his hand touched the holy object, but he felt nothing. No pain. Only a terrible empty blankness, rising slowly into a cold rage.
He kicked the bottom of the door and heard the echo through the house. "Mom!" he shouted. "Mom, it's me!"
There was no reply—only the sound of the bolts being turned on the door. His sensitized hearing had recognized his mother's footsteps, her breathing, but she said nothing. He could smell acrid fear and panic even through the wood. "Mom!" His voice broke. "Mom, this is ridiculous! Let me in! It's me, Simon!"
The door juddered, as if she had kicked it. "Go away!" Her voice was rough, unrecognizable with terror. "Murderer!"
"I don't kill people." Simon leaned his head against the door. He knew he could probably kick it down, but what would be the point? "I told you. I drink animal blood."
He heard her whisper, softly, several words in Hebrew. "You killed my son," she said. "You killed him and put a monster in his place."
"I am your son—"
"You wear his face and speak with his voice, but you are not him! You're not Simon!" Her voice rose to almost a scream. "Get away from my house before I kill you, monster!"
"Becky," he said. His face was wet; he put his hands up to touch it, and they came away stained: His tears were bloody. "What have you told Becky?"
"Stay away from your sister." Simon heard a clattering from inside the house, as if something had been knocked over.
"Mom," he said again, but this time his voice wouldn't rise. It came out as a hoarse whisper. His hand had begun to throb. "I need to know—is Becky there? Mom, open the door. Please—"
"Stay away from Becky!" She was backing away from the door; he could hear it. Then came the unmistakeable squeal of the kitchen door swinging open, the creak of the linoleum as she walked on it. The sound of a drawer being opened. Suddenly he imagined his mother grabbing for one of the knives.
Before I kill you, monster.
The thought rocked him back on his heels. If she struck out at him, the Mark would rise. It would destroy her as it had destroyed Lilith.
He dropped his hand and backed up slowly, stumbling down the steps and across the sidewalk, fetching up against the trunk of one of the big trees that shaded the block. He stood where he was, staring at the front door of his house, marked and disfigured with the symbols of his mother's hate for him.
No, he reminded himself. She didn't hate him. She thought he was dead. What she hated was something that didn't exist. I am not what she says I am. He didn't know how long he would have stood there, staring, if his phone hadn't begun to ring, vibrating his coat pocket.
He reached for it reflexively, noticing that the pattern from the front of the mezuzah—interlocked Stars of David—was burned into the palm of his hand. He switched hands and put the phone to his ear "Hello?"
"Simon?" It was Clary. She sounded breathless. "Where are you?"
"Home," he said, and paused. "My mother's house," he amended. His voice sounded hollow and distant to his own ears. "Why aren't you back at the Institute? Is everyone all right?"
"That's just it," she said. "Just after you left, Maryse came back down from the roof where Jace was supposed to be waiting. There was no one there."
Simon moved. Without quite realizing he was doing it, like a mechanical doll, he began walking up the street, toward the subway station. "What do you mean, there was no one there?"
"Jace was gone," she said, and he could hear the strain in her voice. "And so was Sebastian."
Simon stopped in the shadow of a bare-branched tree. "But he was dead. He's dead, Clary—"
"Then you tell me why he isn't there, because he isn't," she said, her voice finally breaking. "There's nothing up there but a lot of blood and broken glass. They're both gone, Simon. Jace is gone. . . ."
Posted by BookNut 101 at 21:11