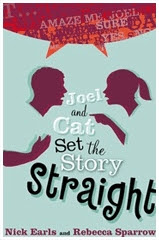 
“I don't hate you...you're just the most annoying person in my life.”

And frankly, they are quite happy with things being that way.

That is, until Cat's surprise hayfever attack and Joel's pen-ink disaster end up paving the way for a paired Extension English Assignment.

And to make it that much worse, the task is a tandem story, which means each one of them must submit a paragraph of the story at a time. No discussions. Just working with what the other's imagination has conceived.

Yet, in two weeks alot can happen.

Cat - on top of the hayfever - must deal with a younger brother with a sweet tooth, her father's fake tan, her mother's emotional rollercoaster, her friend Emma's Barbie IQ and the injustice of being paired with Joel.

Joel - on top of his obvious dislike of Cat - must put a stop to the weirdo dating his mother (who insists he is of Mexican/Spanish heritage but cannot even make decent tacos), fight off the rumours from his friend Luke the pool boy and try to make sure Cat stops killing off his main characters.

But when they find out their parents are considering dating, all fighting halts as they team up to concoct the ultimate plan to return their lives to normal.

And yet, the lingering question surfaces - is normal all it's cracked up to be? And could the comradeship between these two rivals become something neither had expected?

Joel and Cat set the story straight, in this heart-warming novel about not judging the book by its cover.
Posted by BookNut 101 at 13:49