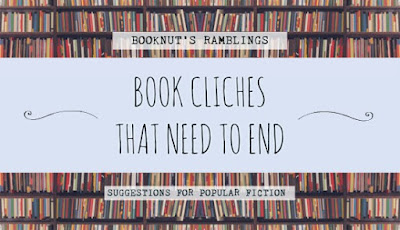 What is a book cliché?

Web definition: an expression, idea, or element of book which has become overused to the point of losing its original meaning or effect, even to the point of being trite or irritating, especially when at some earlier time it was considered meaningful.

My definition: book clichés are like flies. You know they have a function, and they are a part of life...but they can be super annoying. You just want them gone!


What are the most annoying book clichés?

Now that's a good question! Drawing on my own personal reading experiences, Internet research, and the responses you guys sent me via Twitter, I have compiled a list of the top 5 most annoying book clichés that need to end ASAP.

So let's get listing, shall we?!

I cannot count the number of times that I have read a story that has featured a best friend who is simply there to show us how nerdy 'normal' our protagonist is.

Do any of these sound familiar?

Umm...why are none of these BFFs like real BFFs?!

Why don't they support the protagonist's decisions, stop objectifying the protagonist, and make good life choices? Why can't a best friend be a good friend and a good, law-abiding citizen?

But the worst part is, even if they are shown in a good light, BFFs are often overlooked. They're simply there so that the protagonist doesn't look friendless...and has someone to whine about their numerous break ups to.

#4: Popularity is a recipe for nastiness

Popularity isn't often shown as a good thing. Or a thing that can attained by anyone that isn't totally drop-dead gorgeous. Many books fail to take into account the many different types of popularity - or even instances where popularity is attained by people who are beautiful inside and out.

Odds are your popular girl/guy is blonde, into sports (either a jock or a cheerleader), and - for some reason - they detest the protagonist simply because they are breathing.

Is it just me, or is there a point that you just know that the main couple is about to hit a bump in their relationship?

For me, it's normally just after I've read about two-thirds of the book. Things have been going really well, they've been in that blissful butterflies-and-unicorns phase, and they've even managed to adorably stumble through a few "I love you" declarations.

It's the quiet before the storm!

Aaaaand then tragedy strikes. Do any of these sound familiar?

Nothing annoys me more than a couple who just don't seem to realise what real problems are. Or what a phone is. Or talking. Or couple's counselling!

Just once I'd like for the couple's relationship to not be totally predictable. I don't want to be on page 10 and already guess that the story will go: (A) they meet, (B) they fall in love, (C) they break up, (D) they get back together. Surprise me!

Beauty and The Beast was a wonderful fairytale, from which we can take many lessons...one of which is not that a woman should tame a man.

But bad-boys-redeemed-by-good-girls seems to be a cruise-liner that authors are jumping aboard with glee! And why not? It sells. But what it doesn't do is provide readers with unique books that challenge them, give them something new, and make them truly invested in a story and its characters.

To be clear: there's nothing wrong with having a 'bad boy' or a 'good girl' - just do it right. Don't be stereotypical. Don't give the good girl strict parents and the bad boy a motorbike and leather jacket simply because you can. Do it if it adds to the character.

A good girl should be more than that character type, as should a bad boy. Give them logical, thought-out backstories and emotions. Find reasons for the way they act and the people they are. Don't demean the girl by putting her whole life on hold for a guy. Don't make her a silent, timid creature who is there to give the guy a change of heart. Make her a character in her own right.

You can have a rough-around-the-edges male and a badass female in the same story, you know!

Good examples: Katie McGarry and Simone Elkeles. They are queens of turning the 'taming the bad boy' cliché into emotional, riveting stories that are a joy to read.

If you're a character, odds are what is stuck in your eye is a sparkle. Or a glint. Or a gleam!

This delightful cliché that has managed to snag the number one spot on this list can be divided into two parts: what the eyes look like and what they supposedly see.

Let's start with what fictional eyes look like - especially on heroes and heroines. They're never just 'eyes'...ooooh no. First off, they come in a wonderful variety of clichéd colours:

And then, after they've been given an exotically described colour, they have to be given:
Sometimes, guys, it's ok to have normal eyes colours. To make matters even better, not only are these fictional eyes often weird and exotic, but they can't even see good 110% of the time. Especially when it comes to heroines.

Why do I have to be subjected to 10-100 pages of a heroine whining about how she is super-duper plain and ugly? I mean...considering the hot guy next door thinks she's hot EVERYBODY THINKS SHE'S HOT and she looks like a goddess I think there's a pretty good chance that she's not.


So our probably red-headed petite heroine spends her time body-shaming herself...for what? Why can't we have strong females who are full of self-love?

What are your thoughts? Do you agree with the book clichés listed? What clichés would you add to the list?