I'm so excited today to be hosting one of the Kiss Kill Love Him Still Book Blitz stops...and not just because the cover art is to die for!

Learn more about this new NA mystery novel + enter a great giveaway below: 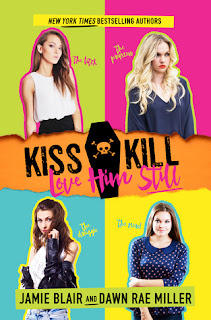 Synopsis:  Jackson Landis kept secrets. It’s how he got girls into bed, the grades he wanted, and a reputation for being the life of the party.

But now he’s dead, and no one knows how or why. Especially not the four girls whose secrets he protected. Secrets so scandalous they could cause each girl to lose something valuable. Secrets so dark, someone may have killed for them.

The four girls – a campus drug dealer, an overweight bookworm, a closeted lesbian, and a spoiled princess have one thing in common – they’re terrified the things Jackson knew may not have died with him. As Reggie, Haddie, Val, and Livie try to piece together her own role in Jackson’s death, each girl realizes Jackson had some not-so-pretty skeletons of his own.

Add the book to your Goodreads bookshelf today!

About Jamie: Young adult author of the Kirkus-starred novel Leap Of Faith (Simon & Schuster 2013), and Lost To Me (2014), featured in the New York Times and USA Today bestselling anthology, Dirty Boys of Summer.

About Dawn: Dawn is a Twitter and fashion addict.

Her favorite things in life are her family, gorgeous dresses, tea leaf salad, and French macarons.

She splits her time between San Francisco and Northern Virginia, and is always up for a trip to Paris.