Jump on board the Random on Tour: Los Angeles by Julia Kent Book Blitz!

Author Julia Kent addresses a range of difficult issues in the latest book in the Random series, whilst maintaining the important theme of hope and recovery. Learn more about the book, the series, and enter a great giveaway below... 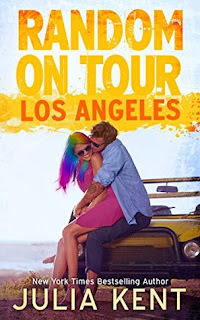 Synopsis: Random on Tour: Los Angeles is the 7th book in the New York Times bestselling Random series, the ongoing story of the up-and-coming rock band, Random Acts of Crazy...

When the band’s bass player, Joe Ross, gets injured in an unfortunate sex act that gains nationwide coverage, it’s tatted-up Tyler (aka “Frown”) to the rescue for their first big concert.

There’s only one problem: the morning of his flight to L.A. he wakes up to find someone’s stolen all his money, his bass, his ID, and his pride. When he shows up at Maggie’s doorstep to ask her to drive him from their hometown of St. Louis all the way to L.A., these two damaged people learn quickly that being independent doesn’t always mean being free…

**Warning**: This book deals with the very difficult topic of sexual assault and rape, and the author as taken great care to address this with the sensitivity and respect it deserves.

Q: Random on Tour: Los Angeles, is a standalone, but it’s also the seventh book in your Random series. Will readers really be able to start with this book?

A: Yes, absolutely. I wrote Random on Tour: Los Angeles for a charity boxed set (all profits donated to diabetes research), and wrote it as a standalone for new readers. You do not need to have read the first six books in the series (but if you like Random on Tour: Los Angeles, definitely go back and read the rest!) at all. Maggie and Tyler (nicknamed Frown because he frowns so much) are side characters from the series, and so their story is fresh.

Q: This is a “road trip romance.” Tell us more.

A: I’ve never written a “road trip romance” before, and when the idea hit me – that Frown would have to turn to the woman whose advances he’d spurned just recently – to help him on a long-distance road trip where they were forced to be in a car for two days, I nearly cheered. That kind of forced closeness creates tension – and, fortunately, attraction!

Q: This is an intense book. Maggie is one of the band member’s girlfriend’s best friends (say that ten times fast). She’s a gang rape survivor. Her rape made national news seven years before, and she’s finally recovered – and is ready to have sex again. Frown is trying to escape his family’s cycle of drug addiction and living on the edge, barely surviving. He has plenty of his own demons and secrets. Why have these two fall in love?

A: Because they’re both so stubborn and so, so independent. Love is about realizing that you’re not alone. You don’t need to put on the “I’m fine” act.

Q: Is that why you have a rather, um...crappy scene when they’re on the road? You add some humor here. A lot of humor. Toilet humor.

A: There’s an extended series of chapters where Frown has to depend on Maggie for everything, and then they have to actually let their guards down as nature, um, intervenes. All I’m going to say – without spilling it – is that you can’t get more real than a road trip bathroom emergency. Or six.

Q: How do you balance the comedy with the much more serious issue of rape and recovery?

A: I never, ever make light of sexual assault, and all of those scenes took place before this book. As for the comedy, I think laughter is a major part of the healing process. Life is funny, even when it’s just plain awful. The hope and recovery that comes from laughter is as important as love. 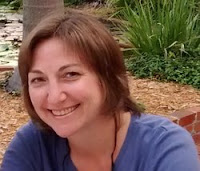 New York Times and USA Today Bestselling Author Julia Kent writes romantic comedy with an edge. From billionaires to BBWs to new adult rock stars, Julia finds a sensual, goofy joy in every contemporary romance she writes. Unlike Shannon from Shopping for a Billionaire, she did not meet her husband after dropping her phone in a men's room toilet (and he isn't a billionaire).

She lives in New England with her husband and three sons in a household where the toilet seat is never, ever, down.

She loves to hear from her readers by email at jkentauthor@gmail.com, or on her various social media sites.