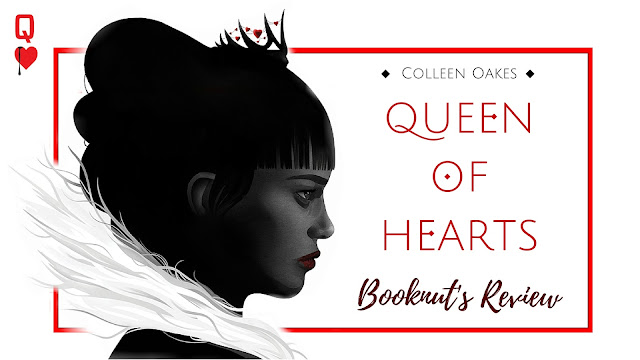 We've reads these stories before and seen them in all their classic glory. Each one with its own set of distinct lines between good and evil, and the roles certain characters have been cast in for better or for worse.

But have you ever asked yourself "why?"

Why does the heroine fight for good?
Why does the villain hate the world?
Why do these characters have these fates?

That's where the re-tellings - the 'prequels' to the stories we think we know so well - come in to play. Queen of Hearts by Colleen Oakes paints a vivid and bittersweet portrait of the Queen of Heart's younger self. Back when a young Princess of Wonderland by the name of Dinah dreamed of the day when she would rule Wonderland.

Colleen Oakes weaves a web of curiosity, twisted deeds, and whirling emotions in this YA fantasy romance that had me intrigued from the very first chapter.

Read on for my thoughts on the book (and hold onto your heads!) 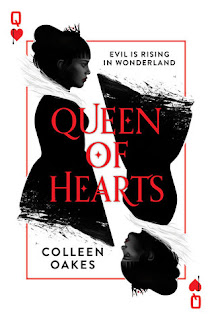 As Princess of Wonderland Palace and the future Queen of Hearts, Dinah’s days are an endless monotony of tea, tarts, and a stream of vicious humiliations at the hands of her father, the King of Hearts. The only highlight of her days is visiting Wardley, her childhood best friend, the future Knave of Hearts — and the love of her life.

When an enchanting stranger arrives at the Palace, Dinah watches as everything she’s ever wanted threatens to crumble. As her coronation date approaches, a series of suspicious and bloody events suggests that something sinister stirs in the whimsical halls of Wonderland. It’s up to Dinah to unravel the mysteries that lurk both inside and under the Palace before she loses her own head to a clever and faceless foe.

Part epic fantasy, part twisted fairy tale, this dazzling saga will have readers shivering as Dinahs furious nature sweeps Wonderland up in the maelstrom of her wrath.

Familiar characters such as Cheshire, the White Rabbit, and the Mad Hatter make their appearance, enchanting readers with this new, dark take on Alice’s Adventures in Wonderland.

Prepare yourself for high-stakes croquet battles, secret-strewn tea parties, and strong sets of cards in a book that's a little mad and a lot brilliant.

What I loved most about Queen of Hearts was how it didn't try too hard to draw connection between itself and the original Wonderland classic. The idea of Wonderland - its wildness, its beauty, its unpredictability - was expanded upon and given another dimension.

Instead of a land solely characterised by its somewhat wacky nature, readers are encouraged to view Wonderland as a world where one either embraces the madness, or is ruled by it.

Dinah is a complex character. I didn't know whether to love her, or hate her - or to judge her for the choices she'll make as the tyrannical woman she eventually becomes. But what I did learn to do was to appreciate her complexity and how it makes her a unique character.

Due to a less than ideal childhood, Dinah is not an expert at dealing with emotions - whether they be love, fear, or wrath. But whilst she may be confused, she's certain of one thing: she wants her freedom and she wants it now.

Dinah's father is a ruthless ruler. A proud, scheming, and selfish man, his subjects live in constant fear. In Wonderland weakness of any kind isn't only frowned upon; it's akin to signing your own death sentence. The weak do not prosper, only the cunning do.

Queen of Hearts is, in a way, a study of how children are often products of their environment. True, Dinah is different - she's a lot more caring than others around her, and sees the world differently. But there's this irresistible lure beneath it all. It's a lure towards the easy path - the path of bloodshed, anger, and grim justice.

Sometimes Dinah forges her own path. In this particular scene from the book, she goes from victim to victorious in a split second. She combines her belief in what is just with the need to instill and evoke fear: 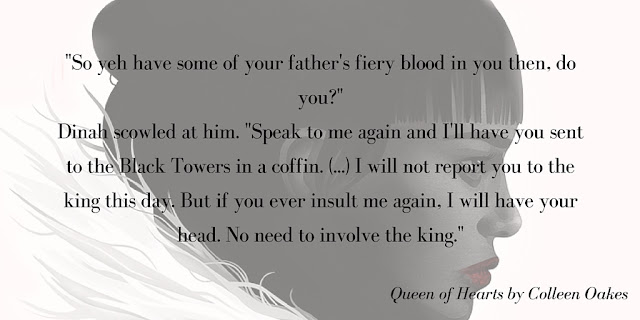 But after this scene takes place Dinah crumbles inside. She feels guilt. And that is what makes her character so intriguing - that almost dual nature. She's one part fearless queen, and one part lost child. She's becoming the kind of person she doesn't want to be but needs to be in order to survive.

Another great part of this book was how the secondary Wonderland characters were woven into the story (e.g. the Cheshire cat is a man, who is a devious advisor to the King). The amount of creativity involved in Colleen Oakes' creation is truly spellbinding, and brings a fresh perspective to a timeless tale.

"Ruling Wonderland isn't for the fainthearted, and the crown weighs heavy, you know that. (...) Someday he will see you for the (...) fierce woman that you will become. The Queen of Hearts. A good and just queen, and a doting sister. I see you growing stronger each day, and someday he will see that."
"Someday," she grumbled, "is not today."

Have you read Queen of Hearts? What is your favourite fairytale retelling or prequel?