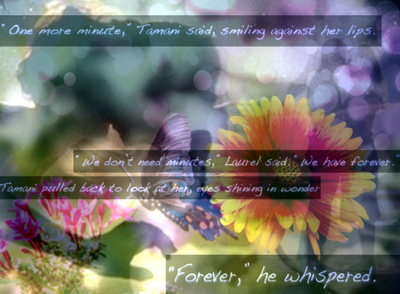 (Above created by yours truly! (Quote from Destined by Aprilynne Pike)

*grins evilly* I will not spoil this book for anyone...yet...but let me just say that it was FANTASTIC!!
A  total rating of 5+

Some tidbits about the storyline:

- Laurel's skills as a Mixer are put to the test
- David has more in common with a certain King of Camelot than he ever expected
- Tamani (who is as hot as ever) struggles between his duty to his people, hid duty to protect Laurel and his undying love for her
- Shar is brave and is a steadfast friend to Tamani
- The Seelie Queen is such a b- horrible little pansy :D
- Chelsea's feelings for David haven't changed
- Laurel makes her decision between the two boys...breaking the heart of one
- Times are a changing! (sorry...I needed to add that line somewhere, I just love it so much!)
- Yuki plays an important part and makes a big sacrifice
- Laurel's history is revealed
- Klea will bring the Fae down at any cost - no matter the number of fae or humans that have to die in the process. Her history is also revealed.
- There is Tavid banter (Tamani and David); they're so adorable when they have their Laurel-is-mine-no-she's-mine-you-bastard conversations!!

My only criticism? It ended.:D