Talented and We Know It ~ Hunted by Sophie Davis 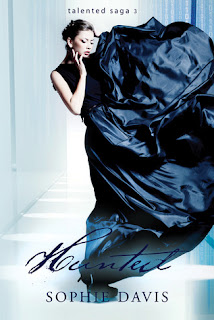 Be ready for anything.

In the latest instalment, Sophie Davis holds nothing back - Talia and the gang are on a rollercoaster of an adevnture, orchestrated by Toxic and their personal decisions...and peril awaits on the other side of the void.

Toxic is precariously wavering on the edge of war. The people aren't happy with their laws, regulations and methods - and they're not afraid to speak up...and even rebel.

Mac refuses to allow Talia to have anything to do with the fights, putting on the facade that life is ok. Toxic is in control. Everything is normal.

Nothing is normal in the life of a Talented.

With Erik by her side - as her 'tower of strength' - Talia makes the decision to find out the truth behind Toxic. Behind everything. To uncover the secrets that are being kept from her, no matter the cost. Some of these secrets will shock you.

The dead will return and the living will regret their decisions and some relationships will never be the same.