I am thrilled to bring you the Review & Excerpt Tour for Donna Grant's Dragon King!

Dragon King is a novella in Donna's Dark Kings Series brought to you by the team at 1001 Dark Nights. 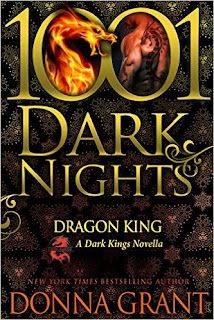 A Woman on a Mission

Grace Clark has always done things safe. She's never colored outside of the law, but she has a book due and has found the perfect spot to break through her writer's block. Or so she thinks. Right up until Arian suddenly appears and tries to force her away from the mountain. Unaware of the war she just stumbled into, Grace doesn't just discover the perfect place to write, she finds Arian—the most gorgeous, enticing, mysterious man she's ever met.

A King with a Purpose

Arian is a Dragon King who has slept away centuries in his cave. Recently woken, he's about to leave his mountain to join his brethren in a war when he's alerted that someone has crossed onto Dreagan. He's ready to fight . . . until he sees the woman. She's innocent and mortal—and she sets his blood aflame. He recognizes the danger approaching her just as the dragon within him demands he claim her for his own...

Keep reading for an exclusive excerpt!

'Grace knew her knees were going to give out at any moment. She didn’t recall why she   had woken, only that she had. With the rain no longer falling, she wanted to see how wet it was. Only she saw two men climbing the mountain.

The next thing she knew, a large form dropped from the sky, only to go back up again   the next moment. She gaped in horror when she saw the turquoise dragon burn one of the men.

Before that truly registered in her mind, things got stranger. The remaining man threw   what looked like a large bubble at the dragon.
“What the hell,” she murmured.
Was she really seeing a dragon? A massive beast that was as beautiful to behold as it was terrifying.

“Dragons aren’t real. And yet, there’s one. Right there. Right in front of me.”

More bubbles hit the dragon. It must’ve hurt because the dragon spun around and flew   back to the man.

Only to land on the side of the mountain.

Grace gawked at the immense width and breadth of the dragon’s turquoise wings as he   spread them out. The scales fairly gleamed in the morning sun, shining brilliantly like metal.

The dragon had two short brow horns and another short horn atop its nose. The head and body were so huge she could barely grasp it, and the tail extended far behind the dragon, twitching as if waiting to be used as a weapon.

What was that old expression? Don’t anger a dragon because you are crunchy.

Well, she didn’t want to anger this dragon. She just wanted to go back to the B&B, get   some sleep, and then check herself into a mental institution because she was obviously losing   her mind if she was seeing dragons.

The dragon’s head snapped back to the man, a low rumble coming from its chest. Grace   told herself to go back inside the cave and find Arian, but she still couldn’t move.

Whether it was from fear or curiosity, she wasn’t sure.

But she remained to see what would happen. And as the man began to throw more   bubbles at the dragon, she was glad she did.

The dragon was a large target. Even when the dragon knocked the man sideways with its wing, he got back on his feet. As the sun rose higher, Grace got a better look at the man. His short black hair was liberally laced with thick, silver strands.

Everything was odd about the entire scene, from the man to the dragon. It had to be a dream. There was no other explanation for such things.

The man blasted the dragon with several bubbles in a row, and to her shock, Grace watched the dragon disappear in a blink.

And in its place was none other than Arian.'

Donna Grant is the New York Times and USA Today bestselling author of the sizzling Dark King series featuring dragons, immortal Highlanders, and the Fae. She was born and raised in Texas but loves to travel. Her adventures have taken her throughout the United States as well as to Jamaica, Mexico, and Scotland.