Up in Flames by Kelly Hashway ~ Review 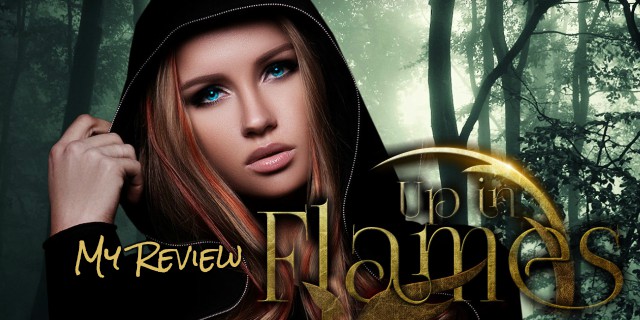 The next book in the Into the Fire series is here so prepare yourselves!

Up in Flames is the third book in the Into the Fire series by author Kelly Hashway.

The book plunges its heroine Cara Tillman into new situations and presents her with new dangers. Although she has recovered her memories there are more trials to come and she will need all her Phoenix powers and all her courage in order to face them.

Read on for my thoughts on the book! 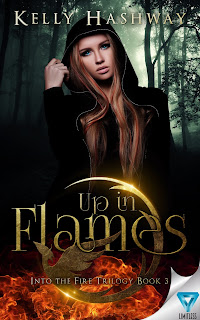 Seventeen-year-old Cara Tillman is in more danger than ever.

All around her, Cara's fellow Phoenixes are being attacked. With no other choice, she and her group take the only option they have-call more Phoenixes out of hiding and wage an all-out war against the Hunters. But with the lines of loyalty blurred, and Phoenix secrets to be kept, there's no guarantee anyone can be trusted.

Logan Schmidt walks the blade of love and obligation-and just one slip may end them all. After stealing the Phoenix dagger and going into hiding, the Hunters are convinced Logan is one of their own. But with Cara's memories recovered, her heart is set on Logan's return. The problem is, she may be the only one who trusts him.

It isn't long until Logan's disappearance is noticed by his long-time friend, Anton Botas, who is more than just an outsider. Though Logan trusts him, the Phoenixes do not, opening yet another fault line in their plans. Where there is one, there are many. Determined to end this once and for all, Cara and the others must destroy the Phoenix daggers-the only weapons able to kill her kind.

But in a raging battle, Cara learns the awful truth about the relics. Destroying them may destroy the Phoenixes in the process. Can Cara and her friends end this war, or is their future destined to go Up In Flames?

Or grab yourself a copy via Amazon.

Thoughts on the book: Normally in books featuring a female main protagonist, it's the female who gets the spotlight. She's the one who undergoes the most changes in character and as readers we connect with her more due to this emotional growth.

The protagonist's love interests, on the other hand, usually come across as two-dimensional and cliche. They're either the 'guy next door' or the 'brooding bad boy' and they fail to capture the deeper level of a reader's interest - sure they're nice to read about but they're just way too predictable.

Kelly Hashway made my day, my week...my year!

Because Up in Flames brings Cara and Logan to life. Cara may be the main protagonist and Logan may be her love interest, but I was fully invested in both of their journeys in Up in Flames as both of them face one of their biggest challenges so far. In fact I may just love Logan a teensy bit more than I love Cara!

I think the reason Logan shined so much as a character in Up in Flames was because up until the third book Logan and Cara have never had the chance to explore an authentic, balanced relationship. Sure, they were together and loved one another but there were so many obstacles in their path that made the relationship unbalanced - like when Cara kept her Phoenix nature from him, or when she lost all of her memories of their time together.

As their relationship is finally allowed to fully blossom, it'll be tested - but Kelly Hashway masterfully shows how true love only becomes stronger in the face of adversity. Up in Flames made me fall even more in love with Kelly Hashway's characters and her entertaining and intriguing writing style.

"I’d give all my lives for you, Logan. Every single one.”

Have you read the Into The Fire series? Apart from a phoenix, what other mythical creature would you like to be and why?