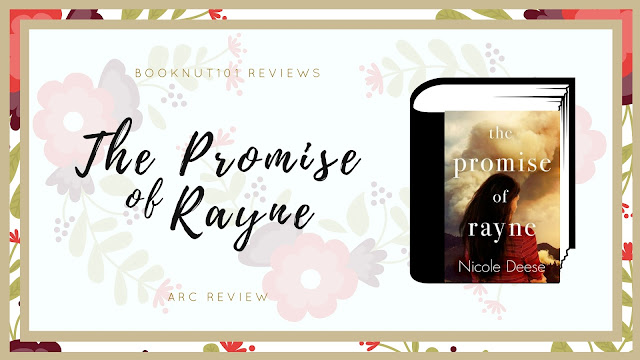 The best books are the ones written with love.

You can just tell when an author is wholly invested in their book. It's in the development of the characters, in their words, their hopes and dreams. There is a special kind of layer that is created, a layer of raw and lingering emotion that makes it possible for readers to really truly connect with the story.

Nicole Deese's characters have real problems. They deal with them in real ways.

I've said this in previous reviews of her books (more like fangirled about it at length haha) and it's still the truth when it comes to her latest novel The Promise of Rayne.

Despite her novels having HEAs and romance, they aren't cliché. Ms Deese takes these romance elements and makes them her own. Her unique writing style is refreshing to read and there are so many reasons to indulge in her stories.

So prepare yourself for an unforgettable tale and characters you can connect with.

I know that I for one was not able to put it down - definitely a 5 star read! So today I'll be outlining my top four reasons to pick up this amazing book.

Without further ado, let's get started! 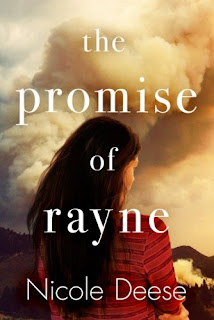 Rayne Shelby has spent her entire life trying to earn the approval of her high-powered family, with the hope of one day managing her late grandfather’s prestigious Idaho lodge. But when she makes a mistake that puts her future in jeopardy, she faces an impossible choice: defy her family or deny her dream. The only way to fix the mess she’s created is to enlist the help of her neighbor, Levi, the apprentice of her family’s greatest enemy. And if Rayne gets caught crossing the divided property lines, the consequences will be irreparable.

Levi Harding has never forgotten the August night he shared with Rayne when they were teens—or the way she later rejected him. Despite his warring instincts, he can’t ignore her plea for help or the spark that’s ignited between them. But now, as wildfires bear down on their town and family secrets are revealed, their newfound alliance might just go up in smoke.


The Promise of Rayne is not only a book with entertainment value. It's one that comes with an inspiring message that struck a chord with me from the first few chapters.

Rayne Shelby, our main protagonist, an accomplished young woman...but a lost one.

True, she has the work around her late grandfather's lodge to keep her busy and she's known the members of the Shelby Falls community all her life. But she doesn't fit in. She spends her days donning different roles, different versions of Rayne in order to please her family and those around her. And along the way she's lost sight of who she is.

The Promise of Rayne teaches us to embrace who we are.

It's overall message is one of acceptance and love. No matter your history, your family, your baggage - peace and love are possible if you trust in and stay true to yourself. Rayne transforms from a meek follower of cruel family traditions, to an independent young woman who is secure in her beliefs, her wants, and her place in the world.

Through Rayne's - and Levi's - journey of self-discovery, we as readers are given the chance to reflect a little. As you read The Promise of Rayne you begin to consider your own life and whether or not you know who the true version of who you are.


Here are some of my favourite lines that highlight this message:


"You were right when you said I don't fit in with my family. I never have. But I fit there (the lodge). I belong there. That lodge isn't just my grandfather's legacy - it's mine too. I won't leave it."

#2: The nuggets of wisdom


There were so many beautiful quotes to highlight and bookmark!

Every Nicole Deese book I've ever read has given me the urge to 'quote hoard'. These quotes aren't just funny, or memorable...they're golden nuggets of wisdom, support, and revelation that are truly beautifully crafted.


Here are some of my personal favourites:

"Good character isn't produced overnight; it's grown over many seasons. In the same way you sort the good apples from the bad, the marks of poor characters are just as easy to detect."

'Her intentions had been well meaning, her words genuine, yet not even the sincerest of hearts could bridge the gap between sympathy and empathy. The difference was clear now. One watched the fire from a safe distance, while the other stood amid the flames, dreams and futures burning all around them.'

"I loved (him), the way a little girl loves a knight in shining armour, but that's all I ever saw of him, the shiny parts. I think I've fictionalised (him) for so long that I never quite saw him as a real person, with real flaws and real struggle and real regret."

They're not mementos of a brilliant story or just aesthetically pleasing. They become words to live by, words that can shape a reader's life or bring them peace or support during darker times. Also by my last count I have 52 bookmarked quotes from The Promise of Rayne so I definitely need to invest in most Post-It notes!

#3: The depth and maturity of the romance


If there's one thing I dislike more than anything, it's a rushed or cheesy romance. Don't get me wrong - I am a huge supporter of HEAs and riding blissfully off into the sunset!

But I like a well-paced romance, that doesn't adhere to romance genre stereotypes or cliches. One where the two people involved are viewed as equal and treat one another with respect and communicate openly.

The Promise of Rayne's Rayne and Levi are a wish come true.

True, they have issues to work through...but these issues just add to the realism of the novel as a whole. They're two adults with lives that don't just revolve around themselves or their significant other. Rayne has a dream of continuing her late grandfather's legacy, and Levi continues to push himself on the farm to prove his worth to himself and to the people he cares about. And although they're attracted to one another, there is no ignoring the obstacles standing in their way.

But these obstacles don't seem all the daunting. Why? Because Rayne and Levi work so well together. They have their moments of disagreement and frustration. There are times where it doesn't seem possible for them to pursue their dreams and hold on to the love they've found. But they continue to fight for one another.

Also...Levi is totally the sweetest guy on the planet!

I will not take up paragraphs fangirling but let me just say wow!

Not only is he charming, hardworking, and kind, but he's also not one to back down or walk away. His obvious love and respect for Rayne are some of the qualities that make him one of the best romance characters I've come across.

#4: People aren't cast in shades of black and white


No one is 'good'. No one is 'bad'. The Promise of Rayne revolves around the idea that labelling and buying into the gossip and badmouthing of others isn't a healthy practice. It leads to nothing but wasted time and opportunities, and heavy hearts.

People aren't perfect! And Nicole Deese shows us that these flaws and mistakes have made these people who they are, for better or for worse, whether they learn from them or not. Even the protagonist has apologies to give (as well as apple trees to visit that part made me teary I will admit!).

There is no lazy writing in this book. Ms Deese hasn't created a distinct 'bad guy' - there's no villain waiting in the wings to pile all of the blame onto. There are simply people - some who have made terrible mistakes and have taken the wrong path in life, but nothing so big as to be completely unforgivable.

Forgiveness is viewed as a gift to oneself as well as to others.

By forgiving those who have caused so much grief and hardship, the protagonists can move on with their lives. After all what use is a HEA if you're still holding hurt, anger, and prejudice close to your heart?! A true HEA is one where the protagonists learn to let go of the past - to learn from it and to start on a better and happier future.

Not a perfect future. But one that is realistic and full of love.

All in all The Promise of Rayne is a tale that wraps itself around you like a warm blanket, bringing you a sense of peace and fulfillment.

Brimming with intriguing characters, raw truths, and heartwarming moments, it's the perfect addition to any romantic's bookshelf!

Have you read The Promise of Rayne or do you plan to? What (in your opinion) makes a good romance?

A big thank you to Nicole Deese for the ARC copy of this book.

Although I was provided with a review copy by the author and/or publisher, all opinions expressed in the following reviews are purely my own. To find out more, please visit my disclaimer page.