ARC Review ~ When by Victoria Laurie 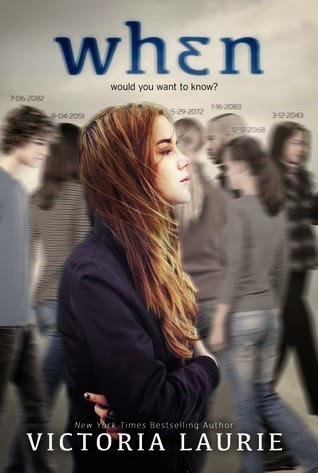 When
By Victoria Laurie


'Why am I seemingly the only person on earth who can see these numbers? Why did fate choose me for such a cruel gift?

It's a question I've asked myself a million times, and I'm still looking for the answer. I think there may not be one, because knowing when someone will die has never changed anything. I've never saved anybody or given them more time.

Etched onto people's foreheads are little black numbers only Maddie Fynn can see.

Far from being lucky in nature, these numbers are people's death-dates. Just by looking at someone - either in person, or through a photo - Maddie can tell how long they have left to live. Years, months, weeks...days.

But not everyone wants to know what the future holds.

Knowing when people are going to die is horrible enough. But having to tell them is even worse.

In order to make money to support her and her mother, Maddie takes on clients - selling her 'death readings' to the curious, the desperate, the hopeful. And it all goes relatively well...until the day her abilities get her into a whole world of trouble.

Because a client's son has gone missing.

And the date he was last seen? The exact date Maddie gave.

She knows the when...but not the how or why.

The law enforcement are on the case, and there's no room for supernatural abilities in their law books. As more and more young people keep disappearing and turning up murdered, all roads seem to lead to Maddie.

Each of the victims is connected to her in some way. But who's pulling the strings?

A tangle of mystery and layered emotions, When is a book to look out for.

If you love a good mystery - with a touch of the paranormal, and a romance that doesn't overpower the plot - then When is definitely for you. Be sure to grab your copy of When when it's released on January 13th 2015...and join Maddie on her race against the clock!

**A big thank you to Netgalley for giving me the opportunity to read and review this book**
Posted by BookNut 101 at 23:06