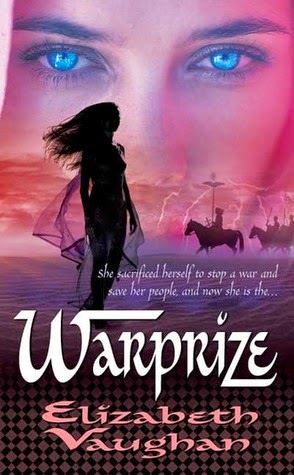 Warprize (Chronicles of the Warlands #1)
By Elizabeth Vaughan

'"But he has claimed tribute."

(...) "What does he claim?" I took a step toward Xymund. Still, he did not turn. I looked around, but no one would meet my eyes.

At last, general Warren drew a breath. "You," he cleared his throat. "He claims you as tribute."

"Me?" My voice squeaked and sounded like it came from a distance.

Would you sacrifice your freedom for peace?

That question tends to be the one that lingers after you've read the final page and closed the book. Xylara's choice - to give up her freedom, her control over her own life - in order to save her people and work towards a lasting peace, is admirable to be sure.

This book's plot, filled with difficult choices and trials for its heroine, is centered around the strengths and limitations of females in antiquity, especially those that led lives among the ranks of the nobility.

I loved the gypsy feel of the Plains people. The rich culture, vocabulary, traditions...it came to life on the page! Xylara's relationship with them changes and strengthens as she begins to realise her own potential and what it really means to be free.

Freedom is a choice. It is not something that can be taken from you.

On a funny note, every time they referred to Xylara as the 'tribute' the Warlord was demanding, I kept having visions of Xylara emerging from a crowd of villagers and staring defiantly at the Warlord, saying:

Although Xylara acts more like Prim/Peter than Katniss. She's a healer and - although badass - doesn't know how to fight, hunt or use a bow.

Have you read any books from the Chronicles of the Warlands series, or do you plan to? Let me know below!
Posted by BookNut 101 at 22:19