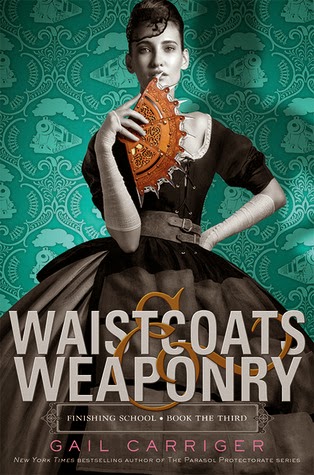 
'"Sovereign, sovereigns, or seduction," said Sidheag calmly, before Sophronia could stop her.

Dimity nodded in agreement. "It's our second lessons after the school motto: Ut acerbus terminus."
Felix looked confused. "What does it mean?"


Return to a world of steel-bladed fans and floating dirigibles.

As Sophronia continues her second year at Mademoiselle Geraldine's Finishing Academy, the Empire's premier school for proper young killing machines, who knows what adventures await her?

From waltzing lessons held on thin planks high up in the air, to being taught the finer points of flirtatious looks, Sophronia and her friends are sure to learn everything there they need to know in order to become the finest of young ladies.

But no number of handkerchiefs, scented oils, and sewing shears will be able to prepare them for what is ahead.

When Sidheag takes off on a daring journey to return to her werewolf pack in Scotland, Sophronia and the gang accompany her. They stow away on a mysterious train, only to discover an enemy they never wished to come face to face with again - and a secret that threatens the very foundations of society.

A secret that could very well throw London, and the world, into chaos.

Nothing's really what it seems...

Working against the clock, Sophronia and the gang must decide who is friend and who is foe, whilst dealing with tea, top-hats, metal dogs, and world domination.

Waistcoats & Weaponry is the latest thrilling book in the Finishing School series and will have you wishing you could attend Mademoiselle Geraldine's, too!

This series is always a delightful mix of quirky, informative, and funny. You're drawn in from the start thanks to elements such as the characters' quick wit, and the rich detail of Gail Carriger's steampunk world.

Every page, every sentence, is a joy to read. It's so hard to pick favourite, but I forced myself to pick a handful of quotes that truly stood out. I hope you enjoy them as much as I did!


'"That's it?" Sidheag was disappointed in Sophronia's desultory description of the pilot's bubble.

"When did you get interested in technology?" replied Sophronia.

"It's not that; I was hoping that after we left, you would fall to your doom. Something exciting for once."

"Thank you kindly, Lady Kingair. The fact that I was initially dropped overboard by a vampire wasn't exciting enough for you?""Not with you, Sophronia, it wasn't."


'"We are on the side of curiosity and evenhandedness. Once we know what’s really going on, then we choose."

“So’s the weather. But this is England, we must learn to live with uncertainty."'


'"You know, Lord Mersey, so far as I can tell, supernatural creatures come some good and some bad. Just like everyone else."

Felix bristled. "And the fact that they hunt humans for food doesn’t bother you at all?"

"On occasion. But I’m not one to judge anyone’s character based on diet. I myself have an unacceptable love of mincemeat."'

#4: A Rather Petulant Petunia


'"Sophronia Angelina Temminnick, what on earth are you doing to the gazebo now?"

Pillover unlashed the airdinghy from where it had been tied to the gazebo columns. It lifted sedately upward.

"Wait," cried Petunia, "come back here this instant! You can’t just drift off with a duke’s son. That’s not sporting!"'

Sophronia forgave him the bad language in fine company. This once.

She also forgave him the compliment. It couldn’t be too bad a wound if he was still able to flirt. Although the flywaymen were listening with interest and she was still dressed as a boy.

Reluctantly, Felix took his hands away from his leg. "Kiss it and make it better?" he pleaded, winsome as an injured child.

"Are you delirious? They’re listening," she hissed.
"Ria, my dove, I enjoy wearing kohl and favor well-tailored waistcoats. I already have somewhat of a reputation."

Sophronia tsked and looked to his thigh.

Stubby said to his companion, "Supposing that actually is the duke’s eldest, do you think he knows his son is a prancer?"

Sophronia found the comment somewhat of a relief for her own part; at least her disguise held. Felix was remarkably untroubled by any questioning of his manhood.

He whispered, teeth gritted under her gentle ministrations, "All rumors will be put to rest once you agree to marry me."

"Oh, of course," replied Sophronia, "because it always works out exactly like that. You’re ridiculous."'

I can't wait for the next book...especially after that epic cliffhanger!

I just wanted to finish up by saying that all the drama and steampunk gadgets were made extra-awesome by me listening to the official Finishing School song whilst reading this book. The song fits the series perfectly. Check it out:

Have you read Waistcoats & Weaponry? Do you like the steampunk genre? Let me know below!
Posted by BookNut 101 at 19:26