Sky Ghosts: All for One by Alexandra Engellmann ~ Review 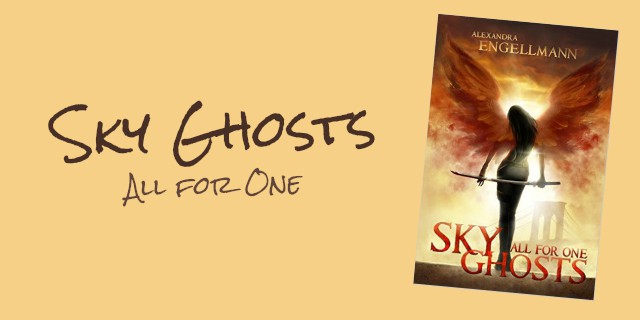 A big thank you to Alexandra Engellmann for submitting this book for review.


As soon as I read the book's tagline 'The Avengers meets Shadowhunters' I knew I had to give it a try!

I was immediately intrigued by the book's foundation concepts - the idea of an elite group of gifted warriors called the Sky Ghosts who protected the city from the Sky Beasts.

Also...any book featuring badass women who fight with katanas is already off to a great start.

However, although the concepts were fresh and exciting there were times where I felt they should have been further explained and explored. The overall cohesiveness of the piece could have been improved upon.

Read on for the rest of my thoughts + a sneak peek into the book!

Book cover: Am loving the Maximum Ride vibes the cover instantly gives off! The intense fiery wings are a delicate contrast to the all-black outfit and shining blade, making for a very striking and bold book cover.

Plot: The adventure begins with a bang!

Barely a few pages into the first chapter and Ms. Engellmann serves us up a dish of badass fighting with a layer of mystery. A wealthy young man named Dave spots a girl taking down two goons. Rather than running away in the opposite direction (like any normal person would, me included!) he hides in the shadows and watches. After she's killed the men, the girl spots Dave, but instead of killing him on the spot she offers to answer any questions he may have...before she then disappears into the night.

At this point, I was bursting with excitement. Our mystery girl seemed sassy and a lot like Isabelle from The Mortal Instruments which is always a good thing. I was excited to see how the characters we'd met would develop and how the concepts would be explained.

However, I found myself slightly disappointed. Not by the concepts - oh no. They were amazing! I loved the lore behind the Sky Ghosts, their founding story, the significance of the mark on their necks, etc. I also liked the idea of a reverse The Mortal Instruments series with the newcomers being male and the warriors being female.

But the story's characters work against it somewhat, as do the POV shifts or shifts in focalisation. Unlike the cohesive and easy flow of the first chapter, the following chapters had many sudden shifts in focalisation. To simplify: in one chapter there were many jumps into different characters' minds. One second you're in Jane's, the next you're reading Pain's thoughts, and then over to Dave, then back again to Jane. It created a very abrupt reading pattern that didn't make for a very immersive read.

Characters: I was truly hoping the story would focus more on the characters who displayed layers and depth. However, intriguing characters like Jane and Dave seemed to get lost in the overwhelming chaos of the story's star, Pain.

Yes, her name is Pain! She delivers it to her foes, her friends...basically to everyone.

She was tiring to read about to an extent. I tried to like her - I really did! - but Pain is just so very in-your-face abrupt and argumentative. There was a lack of realism to her constant tantrums, nasty comments, rude ways, and testy attitude. It was like watching a toddler interact with a cast of adults at times. Pain caused drama to erupt wherever she went, regardless of whether it was necessary or not. I wouldn't have minded if it were just one part of her personality that was brought up on occasion....but Pain seemed to be constantly on edge.

Pain only seemed to have one mode: I Want To Murder You In Your Sleep Mode.

I actually would have liked for her to have been more like her sister, Jane. Jane was witty, badass, and she knew how to be nice some of the time. Not a bad way to be!

Also, the formation of the romantic relationships between characters did not come about organically. Love interests often felt slightly forced, or indecisive - like with the gawking and 'eeny meeny miny moe' crushing. One minute you think Dave likes Pain...next minute you're convinced Marco does...and then you have no idea!

'"You know, I’m not surprised to see that dark-haired dude with the Beasts. He’s clearly screwed up,” Pain whispered.

“To see me, wielding a sword on a dark street, and just come to take a look at me? Who do I look like, Fairy Godmother?”

“Only if he took your katana for a wand,” Jane grinned with mischief.' 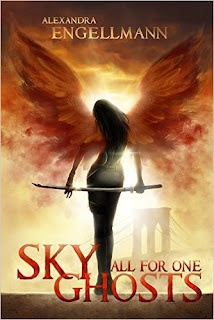 Unseen in their black gear against the night sky, there are Sky Ghosts - gifted warriors who have been hiding among humans for centuries. They are bodyguards of the highest caliber and protectors of their cities at night, when they hunt those who choose the dark side, Sky Beasts.

Jane and Pain from the New York Ghosts Headquarters don't think twice about beheading a Beast or two. One night, they save two young men from their enemies' blades and find themselves in the middle of a war. As they put their lives at stake to save their wards, the main mystery remains unsolved: why would the Beasts hunt two ordinary human boys?

Spellbinding and violent, Alexandra Engellmann's Sky Ghosts series is exactly what Urban fantasy fans are looking for - a blend of action, humor, mystery, and a unique magic system.

"Sky Ghosts is a great mixture of sword-fighting, humor, wit, sexual tension, and "imperfect romance" that brilliantly lets the readers feel like the characters, while supernatural, are fairly ordinary people underneath it all." - Joe Jackson, author of the Eve of Redemption series

"This book has everything. Love, action, fantasy and world-building. This is one of those books which you can imagine sliding into reality, despite its fantastical elements." - Kelly St. Clare, author of the The Tainted Accords