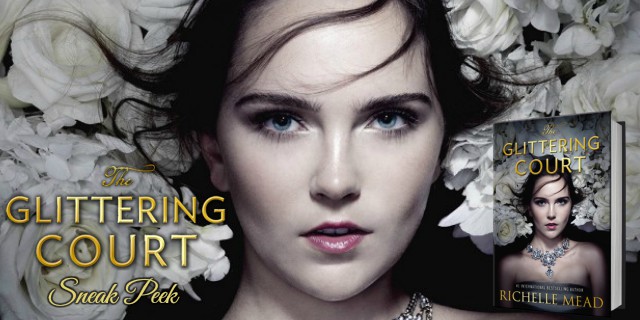 And although I had a pile of TBR review copies I am a weak, weak bookworm who just couldn't say no I clicked the 'request' button quicker than a kid going for candy on Halloween.

I mean...just look at that cover. And I'm a total fan of all things Richelle Mead, so it was a no-brainer - this sneak peek was making my virtual bookshelf, pronto. My only concern? That reading the sneak peek would make waiting for the full book even harder!

Read on for my thoughts on the sneak peek...

Nothing makes me happier than killer opening lines. And The Glittering Court certainly has one:

It gets your little bookworm brain ticking over with possible explanations and plot ideas and it's only the very first line of the book. It's filled with mystery!

The humour was nicely handled too. I mean, sure it was mostly barley-related but it still got a few laughs out of me:

Overall I really enjoyed immersing myself in Richelle Mead's new world and meeting her new set of characters. It was different from her Vampire Academy and Bloodlines style, as well as her Soundless style - actually, it can probably be best described as something in between those two.

The Glittering Court held on to the humour and lore that make Richelle Mead's books so entertaining, whilst presenting readers with a new world full of court intrigue and glamour.

Were there any downsides?

Unfortunately there were a few little flaws. It felt a little...leapy. And not in a Kermit the Frog way!

I just felt that the book scurried from one thing to another in the first few chapters. The first chapter itself barely introduces our protagonist before bringing in a plot complication, politics, extensive etiquette lessons, and a whole load of other details that are just so overwhelming.

Perhaps if the book had eased into the world building and explanations a little, it would have felt less rushed and more immersive.

Still, I am looking forward to reading the full version of The Glittering Court when it comes out. I really want to read the book as a whole so I have a better grasp on the story and its characters :)

Will you be reading The Glittering Court? 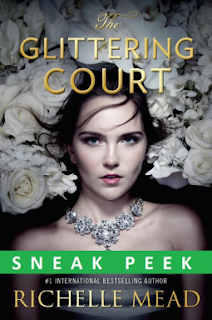 Big and sweeping, spanning the refined palaces of Osfrid to the gold dust and untamed forests of Adoria, The Glittering Court tells the story of Adelaide, an Osfridian countess who poses as her servant to escape an arranged marriage and start a new life in Adoria, the New World. But to do that, she must join the Glittering Court.

Both a school and a business venture, the Glittering Court is designed to transform impoverished girls into upper-class ladies who appear destined for powerful and wealthy marriages in the New World. Adelaide naturally excels in her training and even makes a few friends: the fiery former laundress Tamsin and the beautiful Sirminican refugee Mira. She manages to keep her true identity hidden from all but one: the intriguing Cedric Thorn, son of the wealthy proprietor of the Glittering Court.

When Adelaide discovers that Cedric is hiding a dangerous secret of his own, together, they hatch a scheme to make the best of Adelaide's deception. Complications soon arise—first, as they cross the treacherous seas from Osfrid to Adoria, and later, when Adelaide catches the attention of a powerful governor.

But no complication will prove quite as daunting as the potent attraction simmering between Adelaide and Cedric. An attraction that, if acted on, would scandalize the Glittering Court and make them both outcasts in wild, vastly uncharted lands. . . .