It's Keen Cover Friday and this week's amazing book cover belongs to April Genevieve Tucholke's Between The Spark And The Burn.

Between The Spark And The Burn is book #2 in The Between series and is to be released on August 14th 2014.

Check out the fiery cover here: 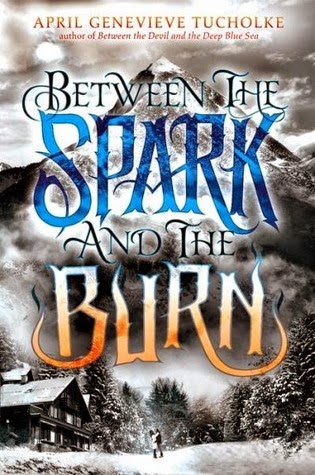 It's no secret that this series has had an awe-inducing use of fonts from the start. And Between The Spark And The Burn had managed to put the 'spark' and the 'burn' into its cover, drawing any reader in from the very star, before they've even read the book's blurb.

If you squint (or have 20/20 vision) you can just make out what looks like a couple embracing below the title. Now, whether this couple is Violet & River, or Violet & Neely, is a mystery. Either way the story's setting, a 'distant mountain town', has been advertised on the cover. I particularly like the contrast between the snowy backdrop and the fiery title.

Who do you think is on the cover? Are you excited for Between The Spark And The Burn? Let me know in the comment's section below!

The crooked-smiling liar River West Redding, who drove into Violet's life one summer day and shook her world to pieces, is gone. Violet and Neely, River's other brother, are left to worry—until they catch a two a.m. radio program about strange events in a distant mountain town.

They take off in search of River but are always a step behind, finding instead frenzied towns, witch hunts, and a wind-whipped island with the thrum of something strange and dangerous just under the surface.

It isn't long before Violet begins to wonder if Neely, the one Redding brother she thought trustworthy, has been hiding a secret of his own . . .' (Blurb via Goodreads)
Posted by BookNut 101 at 10:31