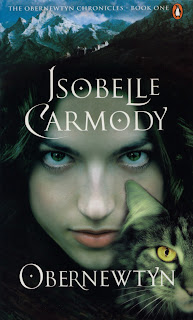 "Sometimes I am afraid for people like you who have to know things. Your kind will dig and hunt and worry at it until one day you will find what is hidden, waiting for you.”


Elspeth Gordie is a Misfit, and it is that fact that threatens her very existence in her society.

Forced to conceal her exceptional abilities - such as prophetic visions and the ability to communicate with animals - she lives in constant fear of discovered.

One day that fear becomes a reality and she is sent away to Obernewtyn.

To her surprise, Obernewtyn is not at all like its frightening reputation suggests. In fact, it is a refuge for Misfits, like Elspeth, located in the scenic mountains.

Elspeth finds some unexpected friends and learns of the harmful experiments performed elsewhere upon talented Misfits and of the destructive powers that may have survived the Age of Chaos that ruined Earth.

There she meets the unfathomable and handsome Rushton, whose identity is a mystery in itself, befriends Maruman the ever-puzzling cat - both of whom are to play great parts in Elspeth’s fate.

Elspeth and the Misfits may be different. But they have the potential to change the world.
Posted by BookNut 101 at 12:39