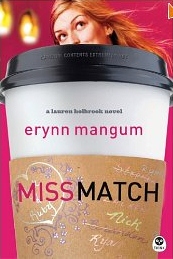 MissMatch
Erynn Mangum
Rating: 5
To Laurie, nothing could be easier than match-making a few friends here and there – but is it really as simple as it seems? And what will happen when Laurie discovers that a simple introduction can bring complicated results – even for her? Along the way - with help from her Bible, friends and wacky family – Laurie learns the meaning of true love, good coffee and the ability to trust that God’s plan is always good enough.
A funny, romantic and heart-warming tale that will have you in its grip until the very last page, Miss Match is a definite pick for lovers of comedy, romance, religion, friendship and tales with a happy ending! Re-Match and Matchpoint – the next installments in the series – are also available, as well as Erynn's new series CoolBeans.
Note: even if you don't like anything to do with God and beliefs, etc., MissMatch is still an excellent read. I know plenty of people who've read it who aren't religious and have said it was well worth the read, just for the storylines, characters and laughter that accompanied it!
Posted by BookNut 101 at 16:48