Sneak Peek from Clockwork Prince - Will and Tessa 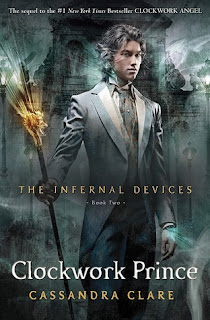 Oh...my...gosh
(And no, it has nothing to do with Usher)
I can't believe what I found whilst surfing the web. In an Infernal Devices-crazed mood, I was on Tumblr and with Clockwork out in the Philippines word's out that Clockwork Prince is everything and more than fans expected.
Some fans posted up quotes from the book and let me tell you the following one had me riveted to the computer screen, imagination flying. So here it is - the "Tessa tells Will off and basically rejects him" excerpt (Note: I have no idea if this is real or not but it has been on alot of sources so for now this is legitimate):
"She turned her face quickly, and his lips brushed her cheek instead of her mouth. He drew back, and she saw his blue eyes open, startled–and hurt. “No,” she said. “No, I don’t know that, Will.” She dropped her voice. “You have made it very clear,” she said, “what kind of use you have for me. You think I am a toy for your amusements. You should not have come in here; it is not proper.”
He dropped his hands. “You called out–”
“Not for you.”
He was silent except for his ragged breathing."
*squeal*! Oh my goodness, Tessa - I mean, we know Will's been a, well, (insert Victorian derogatory word  of choice), but still...that's just heart-breaking!!! Comment below everyone!
BookNut 101
Posted by BookNut 101 at 16:26