I'm content. I could get abducted by Fae tomorrow (hopefully Ash - that would make it much more worthwhile!) and have lived fully, having finished the last book of the Inheritance series by Christopher Paolini. It was...magical (yeah, no pun intended) and fulfilled my high expectations. It may have been a little sad (no sprinklers, but still) but it really shone a light on what makes this series so spectacular and I think Christopher has done a wonderful and praise-worthy job of finishing Eragon's journey. 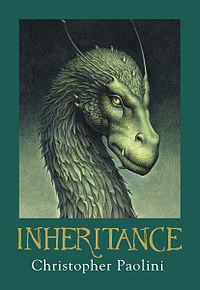 RATING: 4.9
Eragon is just how we remember him - quick-thinking, a little unsure, love-sick (Arya is quite the tormentor!) and overall loyal to the cause of ridding the land of the Big G (great name, right? Like how you have rapper names, Galbatorix can be Big G...anyways....) and of evil.
But it isn't as easy as it seems. Allies are few, Glader is still locked inside his Eldunari, Murtagh is still alive and powerful (and did I mention very, very goodlooking?) and Eragon is hopelessly underprepared for the battle ahead.
A few hints for what's to come:
Now...I was going to rate it a 5, BUT - I was a little sad about the ending. It left so much unanswered, but I can understand the difficulties (e.g. audience interest, length, etc.). Hopefully, one day, we'll hear more about Angela and her past.

Until then, Atra esterní ono thelduin. Mor'ranr lífa unin hjarta onr. Un du evarínya ono varda.
(May good fortune rule over you. Peace live in your heart. And the stars watch over you.)
BookNut 101
Posted by BookNut 101 at 11:25