Super-Mums, Demons and Cake Wars ~ Dark Star Has It All! 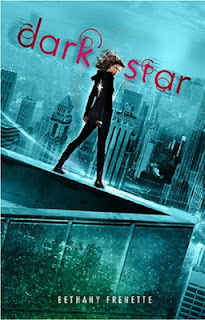 '"I already made icing. I told you not to buy any."

"Oops," I said, taking another scoop. "Looks like I messed up again. Guess I'll have to eat this."
He glanced toward me, giving a pointed look to the two containers I had set beside me. "All of it?" he asked.

"Maybe if you're nice, I'll share...But considering you've already met your niceness quote for the year, I wouldn't bet on it. And you can't have any sprinkles."

"There goes my reason for living."
"I thought that was to make me miserable."'


Life's not easy when your mum is basically a superhero.

And not in the metaphorical sense either. Audrey Whitticomb's mother is a honest-to-God superhero - single mother and frazzled by day, crime fighting and lethal at night. With her teenage sidekick Leon, she's the 'Morning Star' and Audrey's ok with that. Kind of. Dealing the Nav cards and telling fortunes is Audrey's way of dealing with the unexplainable craziness that is her upside-down life.

The Drought and Deluge - the home of ginger ale and greasy mozzarella sticks, and apparently the 'snack bar' for demons, or Harrowers as they're called. After a near scrape with one, Audrey discovers that her mother does more than fight crime. Audrey and her mother (+ Leon) are Kin, gifted with supernatural abilities. It's a dangerous world out there.

Girls are going missing...only to turn up drained of blood.

But no one will tell Audrey anything. So, as per usual, she'll have to take matters into her own hands - whilst trying not to get grounded, or destroying the kitchen by means of an icing and flour war against Leon. Who is the pinnacle of self-righteous fury and the King of Pep Talks. Not that Leon, or demons, could stop Audrey's curiosity from getting the better of her.

It's Audrey's time to shine and show the Kin, Harrowers and those closest to her what she's really made of.


Some of my fave quotes:

- "Torture by maths should be a felony."

I laughed. Gideon's friend, of course. "Only because his mother pays me to hang out with him."

"Can she pay me?" Elspeth asked.

Iris, moving into the room, rolled her eyes at her sister.'

- 'I glowered back up at him. "Did you need something?"

He didn't move. "Where are you going?"

"To plot your downfall," I snapped. I bent to retrieve my bag and then sneaked beneath his arm.