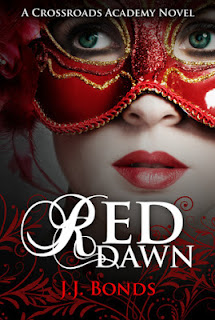 "You know, if you're going to act like a drill sergeant, you might want to invest in a pair of combat boots," I tell her, picking up the goblet by its stem. "The zebra print stilettos are a little misleading."

"Trade in my Jimmy Choos?" she asks, looking horrified. "Never!""

When you go to a boarding school for vampires, you expect the unexpected.

But nowhere in Katia's tolerance for blood drinking, foolish behaviour, annoying headmasters and gruelling detentions, is there a space for rules, regulations and order.

Returning to Crossroads Academy for a new year, Katia is surprised at the strictness that has entered the halls, the uniform they're being forced into wearing and the appearance of a new student. Vampires live for a long time, and Crossroads is pretty old. They've never had such open changes before.

Which begs the question...why now?

When the nearly-finished cure for the vampire blood-disease - Katia's friend Shaye's only chance of survival - disappears, apparently stolen, Katia will do anything to get it back...no matter how many people (vampire or other) she has to threaten to do so.

But the clock is against them, as is their ignorance. Circumstances, memories and situations begin to make sense as pieces of the puzzle click into place.

Something bigger than theft is going on here. Something almost as big as...a rebellion.

Along with her not-so-boyfriend-but-maybe Nik and the Crossroads' stablehand Keegan, Katia must take on the unexpected outside of Crossroads' walls. And out there it's a whole other game.