Entangled TEEN has a number of thrilling YA fantasy titles releasing throughout the winter and into early spring/summer. To celebrate these, they're hosting #CaptureTheFantasy - an ongoing sales event that spotlights a new TEEN title every two weeks!

Titles include:
Thief of Lies by Brenda Drake
Greta and the Lost Army by Chloe Jacobs
Love Me, Love Me Not by Alyxandra Harvey
Atlantis Quest by Gloria Craw
Amid Wind & Stone by Nicole Luiken
Conspiracy Boy by Cecily White
Trial By Fire by Chris Cannon
True Born by L.E. Sterling
Live and Let Psi by D.R. Rosensteel

There are also a number of wonderful events going on during this time, including AMAs (Ask Me Anything) with a bunch of YA fantasy authors on Reddit. 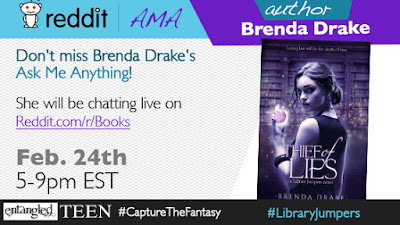 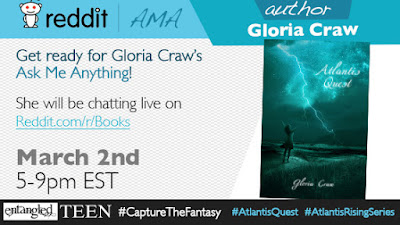 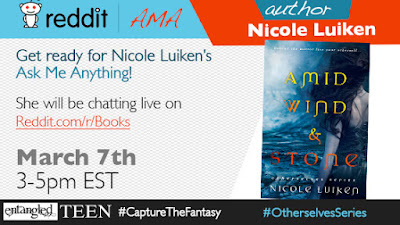 Want to find out more about these great events? Be sure to join the Entangled TEEN Fans Facebook group for updates, prizes and more!

To celebrate the #CaptureTheFantasy event, I decided to talk to you guys today about what traits - to me - make for an amazing YA fantasy heroine. Is it courage? A selection of amazing weaponry? Badass wardrobe choices which must include leather? Read on to find out!

Everyone loves a good fantasy heroine.

A heroine that represents change - who embraces her weakest moments because that way she is able to appreciate her strongest ones. Who radiates a quiet kind of power that not only affects those around her but which wraps itself around the reader, drawing them deeper into the story.

But what traits make a fantasy heroine extra special and memorable for readers? Well after much fangirling and re-reading of my favourite fantasy books quiet contemplation, I've come up with my top five traits that, when mixed together, result in an unforgettable fantasy heroine.

Every heroine has that moment. It's the moment that shifts them from the average road and onto the path of heroine-hood yep I'm making up words as I go! Whether it's a single moment, or the moments that make up their past, something happens to shape the amazing heroine they become.

To be clear it's not the moment(s) that send them on their journey/show-off their skills/lead to a revelation/or result in a darkly handsome stranger kissing the hell out of them.

It's the moment that ignites the fire within them. That gives them their purpose, their reason for being a heroine. It's the cause they carry close to their heart...their reason for surviving and fighting to the finish.

A heroine without a purpose is like a dragon that can't breathe fire. Or...a bookworm who doesn't love books. It's unthinkable. A true heroine fights for something, or for someone. And we, as the reader, identify with her even more for having a reason to continue on the path she has taken.

Gifted in a skill.

Now, I'm not saying that they have to be a ninja badass with the ability to read minds and breathe fire although that would be TOTALLY AWESOME sign me up! But heroines, to me, should be able to hold their own. They should be proud of whatever skills they've been gifted with and should be free to use these skills to further their cause.

Their skill - or skills, because some people are just naturally awesome at multiple things! - could be anything. Skills include the more passive ones like healing, sewing, diplomacy or psychic powers, to the slightly more action-seeking ones like sword-fighting, control of the elements, etc. All skills have value, whether or not they're a result of magic, hard work and practice, or natural genius.

It doesn't matter how shy/subdued/afraid/angry/sad the heroine is, or how large the obstacles she faces are. Like any person with a job to do, she should have the tools to tackle the task at hand.

No heroine should be without a kickass squad or a helpful sidekick or two!

But in order to have a support network of allies, a heroine needs the ability to trust. Trust is an important trait in any heroine and one that she normally holds close to her chest at all times. A heroine will need to gift her trust to those who have proven themselves worthy of a place by her side - whether in the ballrooms of a sparkling palace, or on the battlefield.

Above all, the most important element of this trait is the ability to trust even after one has been betrayed. Many heroines find it difficult to form friendships or alliances due to past tragedies that have left them vulnerable. But their new relationships are made all the more sacred and strong because of their ability to give their trust freely, even with the very real risk of betrayal.

The wielding of wit.

(Yes I am aware that this is a gif from Pride and Prejudice which is NOT a fantasy tale but I'm a diehard Austen addict so FORGIVE ME MY WEAKNESS!!)

To be clear, I love and appreciate heroines who are quiet and shy. I do! But there is just something so entertaining and endearing about a witty heroine who can hold her own in a war of words.

A witty heroine can not only cut you down with a sword, but with words too. She can use words to subtly hint at what lies beneath the surface, either socially or politically. She can blind enemies with her wit so they fail to see the dangers she represents.

Also...witty banter is hilarious to read and is 99.9% of my Goodreads saved quotes. So here are a few of my faves:

“Apparently, a woman can only go so long without a sword between her hands.”
― Throne of Glass

"I've never swum naked in the Thames before, but I know I wouldn't like it."
"But think how entertaining for sightseers," said Tessa.
― Clockwork Prince

A fantasy heroine will faces many challenges on her journey. But the hardest challenges are the ones where a heroine must choose between saving the world, or saving herself and the ones she holds dear.

The sacrifice can be as 'small' even the smallest sacrifice still leaves its mark as having to leave one's homeland, or enduring a harsh corporeal punishment. Or it can be as heartbreaking as watching someone she loves die, unable to stop it or save them.

But the trait that makes a heroine a heroine is the ability to feel. To reign in the whirlpool of emotions and heartbreak and loss and use them to further her purpose. To avenge those who have fought bravely, and to secure a better future for those still living in fear.

A heroine's shoulders sometimes have to bear heavy burdens. And it is her ability to bear these burdens and still continue the fight that turns her from an average heroine into a heroine to be remembered throughout the literary record.

Which Entangled TEEN fantasy title are you looking forward to the most? What trait do you think is most important in a fantasy heroine?