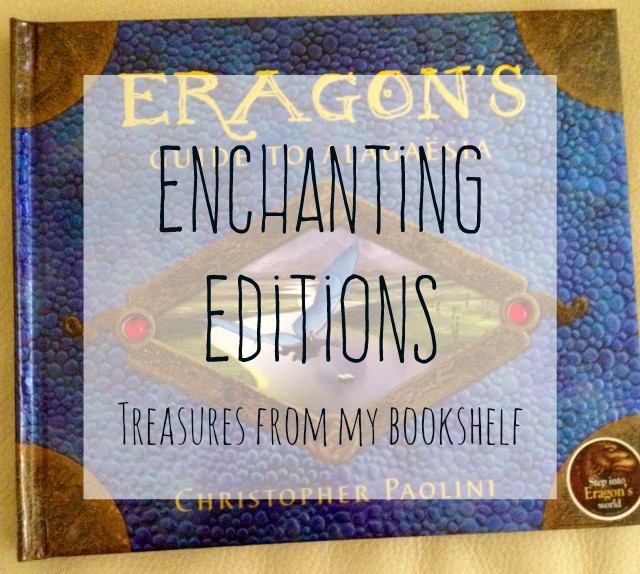 The Enchanting Editions tag covers some of the treasured and special books that have a home on my bookshelves - books which stand out, either due to their outsides or their insides.

I remember the first time I ever laid eyes on this book and COMPLETELY FREAKED OUT BECAUSE WHO HASN'T DREAMED OF BEING A DRAGON RIDER?!  It was a truly a delight to own with its shiny gold lettering, breathtaking illustrations, and fun surprises. 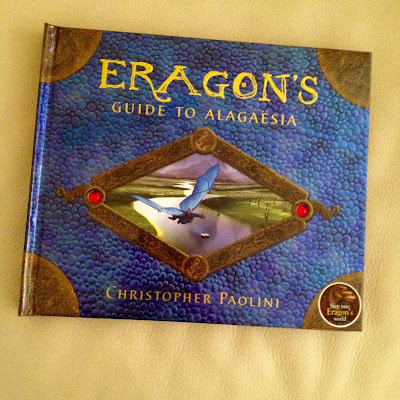 The front (see image above) is a dream come true. I love tactile covers - especially ones that mimic dragon scales. Petting this cover is the closest I will probably ever get to being Daenerys Targaryen, Mother of Dragons. The fake gems on the front are cool to the touch and paired with the archaic gold borders make for a stunning cover. Not to mention the Inheritance series signature font has been used for the title *cue the fangirling*.


The back cover of the book (see above image) features a 'welcome to the ups and downs of being a Dragon Rider' message from Eragon himself...in case you weren't fangirling enough already!

But I haven't even gotten to the best part yet.

The first letter is basically Eragon letting you know that he knows you're totally a rookie. Jeez, thanks Eragon. Good to know that you have faith in me!

The back letter was actually even better (if that is possible at this point!). At first you see another gorgeous silver dragon envelope and a mock-sealed letter.


But when you take the letter out...you discover a hidden gem. A.k.a an ELDUNARI!

I haven't even gotten to what's inside the book yet! This book is filled to the brim with everything you need to know about Alagaesia. Not to mention the super-duper stunning illustrations that grace every page.


It's also filled with lots of Inheritance series treats - tactile surfaces, little booklets, and my absolute favourite a game or two. And by 'game' I mean Angela's Knucklebones!!

What part of Eragon's world would you like to further explore? Do you have a book you treasure on your shelf?